In “Open Minds, Closed Borders,” (January) Ken Schoolland, a university professor of economics and political science, offers the textbook libertarian case for open immigration. It is part of the freedom to move. In Utopia he would be right, but in this particular world he is so wrong. He starts off by comparing immigrants to runaway slaves from the antebellum South and asks: Would a libertarian, transported back in time, bar such slaves? I hate to admit it, but it might depend on how many slaves there were. If there were hundreds of millions, would our attitude be the same?

In any case, an immi~ant from China or Mexico is not a slave. Most are not coming for political reasons, but for economic ones. It’s not freedom they want, it’s the chance to earn more money than they can in their homeland.

Is it in our economic interest to let them in? My answer is: sometimes. Immigrants may pick our apples, slaughter our cattle, drive our taxis, do our laundry, and staff our 7-Eleven stores. They may also write our software and start our dot- corns. Without immigrants, nonimmigrants would do some of those things, and others would not get done. There would be fewer assembly lines, fewer 24-hour stores, and some industries, like handpicked fruit, might go away. And there might be fewer dot-corns.

The current system of limited immigration favors the educated and prosperous because it requires following rules, filling out forms and, usually, knowing people in the United States. It also gives an edge to foreigners attending U.S. universities. A system of no restrictions would let in the unlettered and ignorant. Perhaps if immigration were open, whole new industries would spring up – perhaps a rebirth of personal service. We already have the nanny, which is a kind of a servant. I do not argue, as many do, that with open borders there would be permanent mass unemployment. Jobs would be created. But they would look different from the kind of jobs we have today – the kind appropriate to folks who used to travel steerage-class.

Schoolland writes, “I suspect that the reason for rejecting people from some countries has more to do with snobbish attitudes about ethnicity, status, and wealth than it does with economics.” No kidding. And then he goes on to talk about economics.

The fact is, foreigners are sometimes different in ways that Americans find disturbing. Over the centuries, we have dealt with that by assimilation. We have discovered that the melting pot works pretty well, provided the immigrant group is not too large, and too lumpy, to melt. That means rationing their entrance, and making sure the immigrants are not all of one flavor.

Does this interfere with foreigners’ right of movement? Yes, it does. But all countries do· that. In a world in which everyone does that, and in which you are the richest and most desirable nation, you’re crazy to be the only one with an open gate, and no one to keep count.

Schoolland makes a comparison of immigration with emigration. America, he says, is the only country that allows its citizens the unlimited right to emigrate. I have never heard such a thing, and seriously.doubt it, but I let it pass. Several million Americans do go abroad to work, he says, and they are seen by their host countries as an economic benefit. “Why doesn’t the same logic apply to immigrants from other countries?” Schoolland asks.

First, Americans are not welcomed everywhere as workers. Try it and see.

Second, Americans are rich. When they go to a poor country, they bring wealth with them.

Third, Americans are not immigrants. They are expatriates, who return home.

Schoolland gives an example of Hong Kong as a place in which many people crowd together and support themselves. That is true; yet Hong Kong has not had an open border with China for decades, and still doesn’t, even though it is part of China. It may have 120,000 Filipino maids, but it does not let them stay when their contracts expire. It did not welcome 50,000 refugees from Vietnam. It has not limited the several tens of thousands of Americans, but if an American can’t make a living in Hong Kong at an American standard, the American will go home.

That is the difference.

Schoolland quotes libertarians saying that they’d be for open immigration if there were no welfare. He attacks this position, arguing that welfare is not that important. I agree.

Most immigrants do not come here for political reasons, but for economic ones. It’s not freedom they want, it’s the chance to earn more money than they can in their homeland.

If we abolished welfare tomorrow, we would still have to control immigration. America is too enticing; our standard of living is ten times that of China. Not only is America rich, but the people in countries like China and India are better off, too – better off enough to buy tickets to come here.

That may all be true. But high welfare benefits may still be attracting dependents, even if five times the number of workers are leaving. It is not emigration statistics Schoolland should be looking at, but welfare rolls. I don’t believe welfare benefits are the main driver of immigration, but they are a driver. In particular, there is a problem of immigrants bringing their elderly parents and signing them up for Social 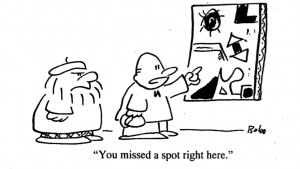 I have criticized Schoolland for bringing up ethnicity and then talking economics, and now I see that I have done it myself. It is difficult to talk about ethnicity. Americans have the idea of the melting pot, that foreigners can come here and embrace the American idea of life, liberty, and the pursuit of happiness, of religious and political tolerance, and that by the second generation they will speak English as a native and have roughly American social and political attitudes. And that has generally been true. But it has not been true in every other country. Talk to a German; anyone will tell you the Turks cannot be assimilated. The Germans say it is the religion. I don’t know; maybe the Germans are going about it wrong. But I do believe, from common sense, that the amount of absorptive power of a nation, even this nation, is limited; that if it is overwhelmed, the nation changes irreversibly. The key is not race but culture. I don’t want the American nation to change so fast, and I don’t think someone who puts great stock in the traditional American idea of liberty would want anything different. Liberty, too, can be diluted even more than it already is.

Look at America’s ethnic politics. It is bad enough as it is; imagine it worse. If you create several more large ethnic groups, the difference between the Democrats and the Republicans could be entirely skin color. I shudder to think of it.

That doesn’t mean I’m against immigration. I’m married to an immigrant. I’ve helped immigrants get green cards. I think it is wonderful that people abroad yearn to become Americans, and that we let them do so. But we have to manage it. The immigrants I know had to wait several years in line, because the quota was full. They had to go to the consulate and fill out forms. They had to have an American resident vouch for them, and guarantee to support them if they

The melting pot works pretty well, provided the immigrant group is not too large, and too lumpy, to melt. That means rationing their entrance and making sure the immigrants are not all of one flavor.

couldn’t make a living. As a matter of fact, they have paid their way – fully. They are citizens. And they are becoming more American every year.

The choice is not between immigrants and no immigrants. The issue is how many immigrants we should allow, and under what rules.

There is a story about Chinese leader Deng Xiaoping, who visited the United States in 1979. He met President Carter, who had been in frustrating negotiations with the Russians about the right of Russian Jews to emigrate. Carter began speaking to Deng. The world’s door was opening to China, Carter said, but China, like Russia, would have to observe the fundamental human right to emigrate.

Deng looked up, surprised. “How many do you want?” he said.

That’s not my point, Carter said –

“I can give you ten million. You want twenty? Thirty?”