Christmas is truly an American holiday. Santa Claus is based on European legends, but the man we recognize is based on Coca-Cola ads. Rudolph was a marketing scheme created by a copywriter over at Montgomery Ward. I seem to think “The Night Before Christmas” was written as a holiday promotion, too. There might be a few European carols still on the holiday playlist,but they’ve been pushed to the bottom by the likes of Bing Crosby, Nat King Cole, and Burl Ives. Dickensian story themes have been replaced by Jimmy Stewart, Dr. Seuss, and Charles Schultz. Kids today are more familiar with the Daisy Red Ryder BB gun than with Tiny Tim.

Before Edison there was simply no way to light the holidays the way we do now. It astounds me to think that some people used to put lit candles on a Christmas tree. I bet that tradition was started by the building trades. In Europe, they don’t put out as many Christmas lights because there’s always a war breaking out every 30 years or so, and they don’t want to give the bombers anything to focus on. They also don’t want to waste the precious electricity they need to power their radios and run the air raid sirens.

European countries also have high tariffs, and can’t afford all the cheap Chinese Christmas decorations that we cherish over here. Thanks to 75 years of Communist rule in China, you now can get a string of 50 lights for under four bucks. It takes a good hour to find the bad bulb and untangle a string from last year; which means you’re work- ing for less than minimum wage if you’re not just throwing them away.

We might envy our cousins in Europe for their one month holiday every summer when all businesses shut down, but if you think about it, this country shuts down for almost a month and a half. From Thanksgiving to New Year’s Day, America goes through six weeks of overeating, parties, and shopping. It’s kind of like a capitalist Mardi Gras before January brings the resolutions and Visa bills, and we all swear, “never again.” 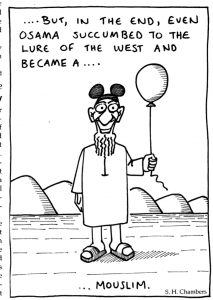 Tim Slagle is a stand-up comedian living in Chicago whose website is timslagle.com.
View all posts by Tim Slagle