Many books tell a tragic story. This book is itself a tragedy.

I eagerly bought Antony Flew’s account of his renouncing atheism, expecting an intellectual challenge. With one exception, noted below, I had long admired Flew’s keenly argued discussions not only of philosophy and religion but also of economics and politics from a classical-liberal point of view.

Flew now accepts some sort of deism or theism (using sometimes one word, sometimes the other). He accepts “the God of Aristotle” (92), a first cause or prime mover: “[O]nce the work of creation is completed, God leaves the universe subject to the laws of nature, although perhaps sometimes providing a rather distant and detached endorsement of the fundamental principles of justice” (156). God has the attributes of “immutability, immateriality, omnipotence, oneness or indivisibility, perfect goodness and necessary existence,” attributes pretty much the same as the Judea-Christian God (the philosopher David Conway, quoted with approval on page 92; notice the treatment of existence as an attribute). In his own words, Flew accepts “the existence of a self-existent, immutable, immaterial, omnipotent, and omniscient Being” (155). Here and there he quotes or paraphrases various other theologians’ descriptions with apparent respect, not examining them for mutual consistency.

The book’s subtitle is inexact: Flew does not tell how – or why, either – he became convinced of error in his earlier views. Not a single theistic or anti- atheistic argument in the book looks new to me, nor could it have looked new to the author of “God and Philosophy” (Delta, 1966) and “Theology and Falsification” (his widely reprinted article of 1950). Flew appeals to the old argument from design (or to design, as he prefers to call it), now just casually decorated with brief and scattered allusions to advanced scientific findings and remaining mysteries. These include the apparent fine-tuning of the laws and constants of nature, life and its origin and teleological organization, DNA, the Big Bang, and the very existence of the universe. These pieces of evidence “can only be explained in the light of an Intelligence that explains both its own existence and that of the world” (155). But these newly mentioned wonders of the world are of the same type as those already cited in the old argument from design. Flew does not pinpoint how he went wrong in previously accepting some and rejecting others of the old arguments about God, nor does he say why he might have changed the weighting accorded to some arguments over others.

What is gained by violating Occam’s razor and postulating an Intelligence that mysteriously explains itself? Who, then, created that Intelligence, and so on in an infinite regress? What supposed findings of science point, in particular, to an entity possessing the scarcely mutually consistent characteristics of the Judeo-Christian-Islamic God? It is ironic to cite the still unexplained wonders of reality as grounds for accepting a particular explanation of them. It is a nonexplanation, actually, for vague words about some sort of “ultimate Source” or “infinitely intelligent Mind” explain nothing. It is particularly ironic when the very science that Flew now invokes continues to push back our ignorance of the wonders that impress him and the rest of us. Possibly God (or whatever the best term might be) is intermingled or identical with all the laws and matter-energy of the universe, as pantheism holds. Anyway, it seems irreverent toward our wondrous universe and the challenges facing science to claim easy insight into what they are and how they originated.

Flew paws away at the problem of evil, invoking the old free-will excuse for God. He tries to explain away only

What is gained by violating Occam’s razor and postulating an Intelligence that mysteriously explains itself?

Flew himself recognizes the legitimacy of asking why people sometimes accept dubious doctrines (“God and Philosophy,” p. 80, 181-90) or, one might add, curiously change their minds. He distinguishes between two senses of reason for believing something: reason as grounds (evidence and argument) and reason as motive. Was Stalin Lenin’s right-hand man in the revolution of 1917? Historical evidence says not; but during Stalin’s tyranny, his subjects had a reason – a motive, prudence – for accepting his claim anyway. Similarly, some people once did and perhaps still do try to believe in Christian doctrines because of the prudential motive of Pascal’s Wager.

Flew’s own conversion, however, appears not to be a case of prudently “cramming for the finals” (as a believer here in Auburn, Ala., urged an aging atheist to do). Flew is not taking out Pascal’s insurance against there being a vengeful God who would terribly punish unbelief; for he says that, as before, he still does not believe in life after death.

I suggest a variant of Flew’s second sense of reason – reason as motive – for holding an implausible belief: facts about the believer himself or his life. Flew may have already lost serious interest in theological issues decades ago, as at least one episode suggests. Yet curiously, he now expresses satisfaction (67) at the thousands who attended “The Warren-Flew Debate on the Existence of God” at North Texas State University, Denton, Texas, Sept. 20-23, 1976. This debate provides the exception, noted above, to my admiration for Flew’s earlier work. To judge from the transcript, which I happened to read and take notes on years ago, Flew gave a sloppy performance, as if he did not consider his opponent and his audience worthy of much preparation. He waived options to use visual materials and to address written questions to his opponent. On the other hand, Dr. Thomas Warren, a Church of Christ minister (who appeared to reject evolution and accept creationism), did exploit these options and did submit questions, to which Flew responded lamely. Flew passed up opportunities to expose Warren’s debating tricks, including pretentious but flawed formal logic. He wandered, dragging in bits of irrelevant and questionable erudition. No wonder that National Christian Press decided to publish the book (Jonesboro, Ark., 1977).

As this 1976 episode suggests, inattention or forgetfulness might enter into explaining belief. Alluding to critics’ references to his “advanced age,” Flew himself implies (2) his being the target of argumentum ad hominem. He was born on Feb. II, 1923. In the interest of full disclosure, I should confess to being within two years as old as he.

Other articles about Flew’s recent life and associations include Mark Stuertz, “God in the Details,” Dallas Observer News, May 3, 2007,+ and Richard Carrier, /~tony Flew Considers God . . . Sort Of,” The Secular Web Kiosk, 2004, with updates as recent as November 2007’+

Despite these articles, I have until now respected the polite convention that Flew wrote his new book. He acknowledges writing “with” a coauthor, which is a standard sign of ghostwriting to some extent. (Another sign of unprofessionalism in a supposedly serious book is lack of an index.) According to internet sources, Flew’s collaborator, Roy Abraham Varghese, is a technical consultant who has a

Flew says that, as before, he does not believe in life after death.

hobby of running a religious think tank and writing pro-Christian books. He wrote the 18-page preface and also AppendiX A, a critique of the “new atheism” of five recent authors.

In Appendix B, Bishop N.T. Wright, a New Testament scholar, explains God’s self-revelation through Jesus. An introduction to it in Flew’s name says that “the Christian religion is the one religion that most clearly deserves to be honored and respected, whether or not its claim to be a divine revelation is true.”

Further evidence on who wrote what could be found, I suppose, by statistical study of Flew’s and Varghese’s writing styles in their current and previous works.

A few religionists of dubious intellectual integrity have apparently latched onto Flew’s academic fame and reputation for their own purposes, sullying his career toward its end. That is why I called the book a tragedy. 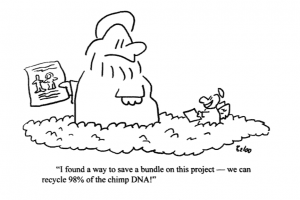