In Washington (the state in the Pacific Northwest, not the Death Star on the Potomac), a media frenzy has developed over what appears to dispassionate observers to be a very small matter. A political activist, who has never supported a candidate for office, used for his own benefit a small portion of contributions that people had made to his organization. Doing this appears to be perfectly legal, although the activist had for a while publicly denied that he had done so.

The reason this is such a big deal is that the activist is Tim Eyman, a watch salesman who several years ago got the idea of organizing petitions for ballot initiatives to make the state’s politicians responsible for how they raise and spend taxpayer money. In 1999, he headed a campaign that got an initiative on the ballot to cut license plate fees to $30 and prohibit the state from raising taxes to get around the restriction without voter approval. This was an immensely popular proposal. For years, Washington’s legislators had routinely added small amounts to license plate fees almost every year, and the result was the highest and most idiotic fee structure 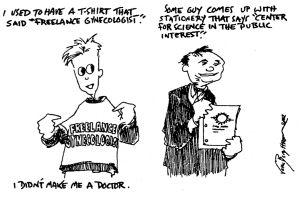 in the nation. I recall paying over $100 per year for a 10-year- old vehicle that had cost only $4,500 new. Residents who drove late-model cars often paid thousands of dollars for their license plates.

Virtually every politician, every business group, every union, and every news outlet in the state opposed the ballot measure, but voters passed it overwhelmingly. The state’s supreme court killed it on the curious theory that cutting a tax and keeping it cut were two separate and distinct measures and thus violated a provision of the state’s constitution that required initiatives to cover only a single subject. But the state legislature, fearing the wrath of the citizens, quickly cut the license fees to $30.

It was a victory for Eyman, who has since organized other initiatives that have limited taxes and spending, in the process becoming the most effective pro-liberty public policy entrepreneur in the nation. Not surprisingly, he is hated by virtually everybody in the state who wants bigger and more powerful government or who profits from state spending.

On Feb 1, the Seattle Post-Intelligencer reported that  Eyman had paid himself $45,000 from the money raised on behalf of one of his initiatives. Eyman denied it. Two days later, he admitted that he had taken· the funds, and apologized. The media.frenzy continued, and the airwaves were full of denunciations of this “corruption.” For nine days, none of his supporters called for any action, but on Feb. 12, the co-chairpersons of his organization “benched” him, obviously in an attempt to quiet the attacks, though they made it clear that Eyman was more than welcome to return to his post, and that they would be glad to pay him a salary for doing so.

While this tempest in a teapot plays itself out, a case of real corruption is taking place with nary a whimper from the news media.

Last year, multi-millionaire Maria Cantwell won election to the U.S. Senate from the state of Washington. Her drive for public office was funded mostly by her own millions, which she lent to her campaign. Comfortably ensconced in the Senate, where she has substantial influence on how $2,100,000,000,000 is spent each year, she is perfectly free to solicit campaign contributions. But they are contributions in name only: Since her campaign still owes her millions of dollars, the effect of making a donation to the campaign is to 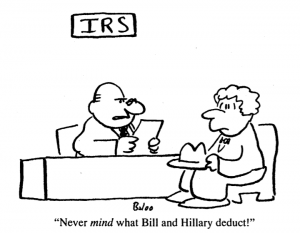 put money directly into her pocket. Not surprisingly, businesses and individuals who might benefit from the $2.1 trillion have donated generously to her campaign; Le., given her money for her own direct personal benefit.

As is the case with Eyman, it seems that all this is perfectly legal.

But there is one big difference between Eyman and Cantwell. Eyman is not now, nor has he ever been, in a position to confer governmental benefits on any person or any company. Yet the media and the political establishment are furious over the “corruption” of Tim Eyman, who has no ability to reward donors with anything at all and who has collected so little money for several years of hard work that he may not have even received the minimum wage. And they couldn’t care less about Cantwell’s pocketing millions from donors who stand to benefit from her power over spending and legislation.