Extremely important in classical liberal philosophy are the distinctions between negative and positive rights, and between rights and social goods.

We classical liberals take a dim view of positive rights.

Unfortunately, people often confound social goods with positive rights. I don’t think that any person has a positive right to an elementary education, but I do hold elementary education to be a social good. It is beneficial to society generally and me personally that citizens be widely educated. It makes for a more productive workforce, and hence a more prosperous society, and it increases my chances of flourishing. If I become gravely ill in a society that has few doctors, I may well die as a result.

But even granting that something is a social good doesn’t mean that it has to be provided by government. A classical liberal can hold that it should be provided by private groups, or even that government should subsidize it but not provide it directly.

The most obvious example of the latter approach is the voucher system for schools. Under this system, the government collects the money allocated for public education, but instead of running the schools, it gives the money directly to parents, in the form of a coupon that can be used at any school that accepts it. This allows the force of competition to exercise its invisible hand to keep quality high. It also minimizes the intrusiveness and inefficiency, the dead hand, of government.

A recent study put out by an eminent British thinktank, the Adam Smith Institute, carries this line of thought into a novel area. Entitled “Arts Funding: A New Approach,” by David Rawcliffe, it explores the idea of vouchers for art.

Rawcliffe begins by reviewing the expensive and inefficient bureaucratic structure by which the UK funds the arts. Essentially, four councils (one each for England, Scotland, Wales, and Northern Ireland) distribute nearly 700 million pounds (well over a billion dollars) to support the arts. This money is taxed from the people and given to the councils, whereupon bureaucrats dole it out to various individual artists and art organizations, by criteria that are notoriously unclear.

Rawcliffe then considers reasons for and against subsidizing the arts. Two arguments typically given for subsidization are that it creates “positive externalities” and is a matter of equity. Positive externalities include the national pride instilled by flourishing arts, the important legacy that art provides for later generations, the broadening of education generally, and the help that a vibrant art scene lends to tourism. The equity consideration is that the poor cannot afford to attend arts events or visit museums.

Clearly, both of these reasons are debatable, as Rawcliffe notes. He observes that an earlier study, done by David Sawers at another fine British free-market thinktank, the Institute for Economic Affairs, argues on empirical grounds that those positive externalities are overstated at best. I would add that observation shows us that the great art which attracts people to the museums of the world was mainly produced before World War II, and it was usually supported by private patronage, not government subsidy.

As to the equity argument, it too is debatable. Taxing Ms. A to give Mr. B a ticket to the opera is forcing A to work for B’s leisure.

For these reasons, Rawcliffe doubts that the arts should be subsidized at all, as do I. But the reality is that subsidization of art enjoys deep public support, not to mention support among elites, and within the arts bureaucracy itself. So subsidization is likely to continue.

Rawcliffe therefore suggests that, if the arts are to be subsidized, the most efficient approach is to take the money allocated and simply give each citizen a yearly arts voucher of about 11 pounds ($17) to spend on arts events that the citizen chooses. 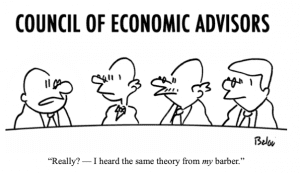 Rawcliffe shows, distributes the money disproportionately to the big cities and to professional and higher-income people, rather than to smaller cities and the working class. Moreover, the large arts bureaucracy, whose salaries consume much of the taxpayers’ money for the arts (on the order of 10%), would be dramatically reduced. The scheme would also make artists aim to please the citizens whose taxes pay the subsidies — as opposed to pleasing the arts bureaucrats, who contribute nothing. The idea would reduce the corruption and politicization of the arts. And it would spur competition among the creators and purveyors of art.

This is an altogether fascinating case of the voucher concept.

Gary Jason is an academic philosopher and a senior editor for Liberty. His most recent books, Cinematic Thoughts and Purchase, Power, and Persuasion are both available through Peter Lang Publishing.
View all posts by Gary Jason