A coyote was spotted in Central Park in Manhattan in late March, loping through the mini-wilderness of Hallet Sanctuary, a 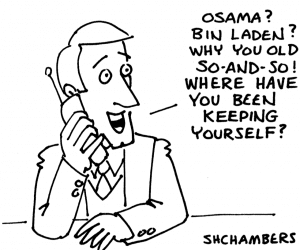 wooded island at the south end of the park. He was promptly nicknamed “Hal” and became the biggest nonhuman celebrity and media sensation in New York since the hawk who was evicted from his nest on the facade of a top-drawer Fifth Avenue building (“Nature au naturel,” Reflections, March 2005).

Dozens of cops, who you would think might have something better to do, like nothing, got involved in the pursuit of Hal, as he eluded his would-be captors by jumping into lakes, streaking past a film crew shooting some Hollywood epic in the park, and leaping high fences. Finally, after two days of thrilling escapes worthy of a dozen car-chase scenes, he was shot, for his own good, of course, with a tranquilizer dart amid the rocks and woods of a rugged area in the park a mile north of where he was first seen.

He had survived all sorts of hazards at that point. He must have wandered down from the hills of the Hudson High- lands, where coyotes commonly roam, some 50 miles to the north, dodging traffic and real-estate agents down through the Westchester County suburbs and the Bronx, crossing over a railroad trestle or swimming the Harlem River to get into Manhattan without having to pay the exorbitant bridge and tunnel tolls imposed on most visitors. The speculation was that he had kept to the edge of the Hudson River along the west side of Manhattan, then boldly headed east past a mile of pricey apartments and shops to get over to Central Park, where the piles of feathers he left behind indicated that he had eaten quite well (and the same dish, canardfrais au parc central avec pigeon gras, would undoubtedly have run $50 or $60 as an entree at nearby restaurants).

But the ultimate hazard awaited the daring and handsome young (I-year-old) coyote. Bureaucracy and its Procedures. Good intentions abounded. He was, the announcement came, to be taken upstate and released somewhere in the Adirondack Mountains. How long could that take, for God’s sake? You can drive up there from the city in five hours at most. Ten days later came the news that Hal had suddenly died in the custody of the state Department of Environmental Conservation, just as they were finally almost ready to get around to taking him upstate and setting him free. An expert’s report was due, of course, but it was quickly revealed that the officials “caring for” the coyote had, according to the New York Post story, “aggressively hogtied the animal, wrapped his snout in tape and lassoed his neck because they feared being bitten…. Both his forelegs and hind legs were roped together … Workers [preparing to tag him] also held him in a noose using a ‘catchpole’ normally considered safe.”

There was no indication whether the tape around his snout was red, but it was all clearly the equivalent of making him fill out forms, processing his application in triplicate, auditing him and certifying him, running a background and credit check, and looking into whether he had any unpaid parking tickets, while compelling him to wait, and to wait, and then wait some more for release from the bureaucrats’ protocol-encumbered clutches.

Poor Hal. Having accomplished something heroic all by himself, he couldn’t be left alone. No, he had to be seized hold of and protected by the state … and from what, exactly? What if he had simply been allowed to remain in the park, until he eventually got tired of New York and its frantic pace and decided to make his way back upstate again? Who was threatening him? Drug dealers? Tourists? Publishing agents looking for paperback and TV-movie rights? And aside from a few ducks and not exactly irreplaceable pigeons, no one was being threatened by him. But he was caged and bound until he died, maybe of stress, maybe of despair, since like the rest of us he may have realized that once in officialdom’s smothering embrace it’s all over, you’re never really going to be allowed to be on your own again, you’re hogtied, according to regulations, and for your own good, of course.