Yes, a picture is worth a thousand Reflections; while one Reflection can never do justice to the worth of thousands of people shouting Libertad! This photo, sent from Havana by a friend of my cousin via WhatsApp, shows thousands of Cubans marching along Havana’s Malecón, passing right by the US embassy. It viscerally depicts the rising of the Cuban people against the Castro government, now under the thumb of Miguel Diaz-Canel, president of Cuba since 2019, when Raúl Castro retired. 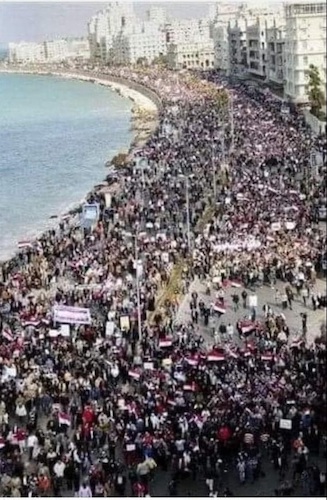 What has seemed like a sudden phenomenon of discontent actually began in January 2021, when the Cuban government announced the merger of two currencies, the CUC and the CUP, resulting in a 2300% devaluation of the CUP, Cuba’s national currency.

Since its introduction in 1994, the CUC, or convertible peso, has been pegged at par with the US dollar. On the other hand, the CUP has fluctuated unpredictably with the CUC and has been subject to price controls and every sort of government manipulation imaginable.

The dual currencies proved ungainly and were slated to be merged by scrapping the CUC as early as 2013. Since about two-thirds of Cuba’s population is paid in CUPs, but depends on CUCs as the necessary currency for most transactions of hard-to-obtain (and getting harder to obtain) goods, the merger and devaluation have caused extreme hardship. As Carmelo Mesa-Lago (in “Currency and Exchange Unification in Cuba: Regulations, Effects, and Perspectives [Part I],” Cuban Horizon, Cuba Capacity Building Project, Columbia Law School) reports, “The population is paid largely in CUP, but they must buy many goods and services in CUC.” People were given until June 2021 to complete the exchange of personal CUC funds, all into CUPs.

Extreme shortages of just about everything, including black beans and rice, have hit even the black market.

Bad enough. Then on June 21, Cuban banks announced that they would no longer accept US dollar deposits. Since 90% of remittances to Cubans come from the US, this piles another unexpected level of adversity onto the longsuffering Cuban people.

There are various explanations for the change. According to Luis R. Luis, former chief economist of the Organization of American States, “the official explanation is that it has become impossible to place dollars in cash abroad. [However], to my understanding there are no prohibitions for the placement of cash. Yet, Cuba’s deposits in foreign banks have fallen by 51% in the past two years, which has diminished the interest of banks in doing business with the island.”

According to the Havana Times, “Prices have shot up and inflation will probably reach a minimum of 500% and up to 900%, this year.” (Luis came up with comparable figures.)

A recipe for disaster? With Cuba’s foreign exchange plummeting, imports are drying up. And with Cuba dependent on imports of energy and food — yes, food . . . when I visited there a few years ago, the only orange juice available was imported from Britain, of all places! — the situation is critical. Extreme shortages of just about everything, including black beans and rice, have hit even the black market.

And covid arrived, and Venezuela, economic friend of the regime, all but departed (it has its own problems). While the covid infection rate was relatively low, and the Cuban government’s strong response was relatively successful, the new variants are spreading fast. Of course, there is a shortage of vaccines. Tourism normally accounts for more than 10% of Cuba’s hard currency earnings, but Cuban Minister of Economy and Planning Alejandro Gil says, “There is practically no tourism.” Tourism is down by 95.5% compared to the same period in 2020.

“Ya no tenemos miedo!” (We’re no longer afraid!), they yelled at police, and “Abajo la dictadura!” (Down with the dictatorship!)

Major news outlets such as the New York Times and The Guardian are emphasizing that the current demonstrations are for vaccines and food. But the people are not shouting, “Vacunas y Comida!” Instead they are shouting, “Libertad!” and “Patria y Vida!” The first, mostly translated as “freedom,” is actually “liberty,” while the second is a play on the revolutionary slogan “Patria o Muerte!” (Fatherland or Death!), a twist the regime hates. But the demands go further: “Ya no tenemos miedo!” (We’re no longer afraid!), they yelled at police, and “Abajo la dictadura!” (Down with the dictatorship!)

The Cuban American National Foundation (CANF) had been reporting an increase in demonstrations and strikes ever since Diaz-Canel became president. Although the regime brutally targeted artists and writers, it had not responded as draconianly to the demonstrations and strikes as previously and had actually compromised on some of the issues precipitating the strikes. No doubt this emboldened people. According to the CANF Boletín Informativo, a recent demonstration took place in Havana at 11pm; the police ignored it.

But now the regime is striking back. Diaz-Canel blames the demonstrations on saboteurs and the US embargo. In a new low even for this regime, “The Cuban president answered the unprecedented protests by authorizing police shootings on unarmed civilians — and, in his words, ‘summoning all the revolutionaries and all the communists’ all over Cuba to confront the demonstrators, openly instigating Cuban-on-Cuban violence.”

Robert H. Miller is a builder, outdoor adventure guide, and author of Kayaking the Inside Passage: A Paddler's Guide from Olympia, Washington to Muir Glacier, Alaska, as well as the memoir Closing the Circle: A Memoir of Cuba, Exile, the Bay of Pigs and a Trans-Island Bike Journey, now available from Cognitio Books. His newest book is Mr. Quarter to Two: Life and Death with Mother Nature's Misfits (which warranted a review in Rock & Ice, America's premier climbing mag).
View all posts by Robert H. Miller