Scene: a rural hospital in the Congo. A man lies on a bed, vomiting, bleeding, dying. He is only the first: already three more with the same symptoms lie next to him in the quarantine ward. Tests confirm the doctors’ fears: it’s an outbreak of Ebola. But much, much worse news is to come. A lab in Kinshasa finds that the Ebola strain has mutated. Formerly it spread only through contact with infected blood; now it spreads through the air. Everyone in the rural hospital is as good as dead. There will be no one to bury them: once the virus spreads, via infected travelers and refugees, most of humanity (up to 90%) will die as well.

It’s the kind of disaster scenario often presented in blockbuster movies and made-for-TV miniseries, an update of the nuclear-apocalypse drama popular during the Cold War. Actors like them because they get to show off their emotional range. Audiences like them, just as they’ve liked every iteration of the destruction of civilization story since the Mesopotamian flood.

At least one modern environmentalist likes them because he wants to see civilization destroyed, and 90% of humanity dead.

Dr. Eric Pianka is an evolutionary ecologist at the University of Texas, named by the Texas Academy of Science the 2006 Distinguished Texas Scientist. At a recent Academy meeting, Pianka spoke lovingly of the Ebola virus as a swift, efficient killer, lamenting only that the crucial mutation of his doomsday scenario had not yet come to pass – though he assured his audience that it was “only a matter of time.” After his speech, the Academy members rose to their feet and gave him a resounding, jubilant ovation.

Why did they applaud him? Why didn’t they censure the crackpot, and cast him from their midst? Simple: to most of the audience, he’s no extremist. He’s only taking their beliefs to logical conclusions.

The ecological movement has always had an “understanding” with death (after all, it was ecological protests that got DDT banned, and indirectly sent millions who subsequently contracted malaria to early graves). The perennially pernicious “Population Bomb” played off that partnership – one can’t help thinking that even had Ehrlich and his ilk known how to win “the battle to feed all of humanity/’ they wouldn’t have wanted to. To the population bombers, human life is, at best, a nuisance. At worst, humans are the planet’s nemesis, doomed to destroy the planet that spawned them. It’s not a long hike from there to Pianka’s precipice of madness.

There are, of course, still many environmentalists who don’t long for the deaths of 5 or 6 billion. For all their talk of “sustainable development,” they do want humanity to be sustained, and continue to develop. And they are the ones best equipped to deal with Pianka, by simply laughing at him. Ridicule from capitalists and Catholics is expect- ed, encouraging even; it’s Pianka’s colleagues alone who can laugh him into academic obscurity.

Perhaps some are laughing already. It’s just too hard to hear them over all the applause. 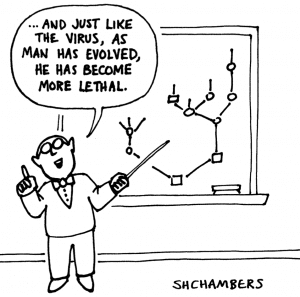