I helped murder families in Colombia. It was just innocent fun.

I helped kids learn how to kill. I was just having some fun, ya know.

Then the screen faded to black with a message in bold white letters:

And a voiceover said: It’s not like I was hurting anybody else.

The ONDCP followed up with a series of full-page newspaper ads, featuring extreme closeups of ordinary.;.looking people, with a caption printed in white letters across their 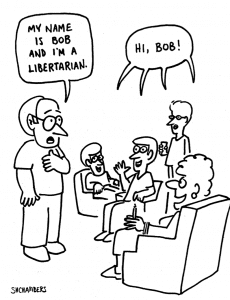 noses saying things like, “On Wednesday, I played tennis, went to the mall, and helped smuggle guns to the Taliban.” Across the bottom of the ad was this advice, “Drug money helps support terror. Buy drugs and you could be supporting it too. Get the facts at theantidrug.com.”

The Drug Policy Foundation reacted to these ads by sending out a press release calling the ads “a.politically motivated misrepresentation of the actual relationship between terrorism and illegal drugs” and pointing out that “the drug war – not drugs themselves – creates the illegal markets which help fund criminal and terrorist networks.”

The Libertarian Party did more. On Feb. 27, it ran an ad in USA Today and the Washington Times. At first glance it appeared to be one of ONDCP’s ads: an extreme closeup black and white photo of an ordinary-looking man with white letters across his nose. But there were three crucial differences:

The message on his nose said “This week, I had lunch with the president, testified before Congress, and helped funnel $40 million in illegal drug money to groups like the Taliban.”

And the message at the bottom said, “The War on Drugs boosts the price of illegal drugs as much as 17,000 percent – funneling huge profits to terrorist organizations. If you support the War on Drugs or vote for politicians who wage it, you’re helping support terrorism. Get the facts at www. LP.org/drugwar.

The LP had hoped it might smoke out czar Walters into a joint appearance on a news program. That did not happen. But the LP got a fair amount of media coverage, including an interview of LP honcho Ron Crickenberger on the highly-rated “The O’Reilly Factor.” Crickenberger did very well.

I don’t know about you, but sometimes I am especially proud to be a Libertarian.