How oft we see the law of unintended consequences bite statists in their butts. A recent illustration is the brouhaha about English-only requirements on the job.

Contemporary left-liberals are frequently what I call multiculturalismists. That is, they subscribe to an extreme form of multiculturalism and use it as a tool to attack American society. Broad multiculturalism is simply the view that all cultures have their good and bad aspects, and none is so good that it ought to replace all others. I am myself a moderate multiculturalist or, as I prefer, a cosmopolitan. I am very pleased to be an American. I think that American culture is not on the whole inferior to others. But I surely would not want to see it sup- plant all other cultures, and I have a visceral aversion to the idea of imposing it on other countries. I hope the French, the Mexicans, the Greeks, and so on retain their distinctive identities, because I so enjoy visiting those countries and experiencing (however superficially) their cultures.

I am not extreme in this multiculturalism. I don’t hold, for example, that there are no dysfunctional cultures. The culture of (say) Nazi Germany comes to mind. A few cultures have such virulently nasty features that the whole of them becomes repellent. Moreover, while I am a moderate multiculturalist, I am also an assimilationist. I believe that if I were to emigrate to some other country, with the intention of becoming a citizen there, it would be my moral obligation to learn its language, culture, and customs. If I moved to France, I would attempt to become fluent in French, as hard as that would be for a linguistically challenged individual such as I. I would broadly assimilate to the culture. I wouldn’t demand bilingual ballots in French and English, or insist that the American flag be flown at French sporting events.

These thoughts come to mind when I see the entrenched resistance by multiculturalismists in government to attempts to get immigrants to learn English. I mean, it just seems obvious that all new immigrants should learn the language. Polls consistently show that the vast majority of people – including Hispanics – agree with this notion, and it remains one of the requirements for attaining U.S. citizenship. It’s a matter of assimilating to the country and culture the immigrant has freely chosen to join, not a chauvinist claim that English is superior to all other tongues.

But alas, resistance to common sense runs deep in the bastions of the Left.

Consider what happens to companies that introduce English-only rules. Such rules seem quite reasonable for many businesses: they promote workplace harmon)’, and they guarantee that important information (such as about imminent workplace dangers) can be conveyed quickly. But the EEOC has been extremely aggressive against these rules, filing 200 lawsuits against them during 2006 alone.

When Sen. Lamar Alexander (R-TN) – hardly an ultra- rightwinger – tried to introduce an amendment to bar such government lawsuits, it was blocked by the Congressional Hispanic Caucus, led by Rep. Joe Baca (D-CA), with the back- ing of House Speaker Nancy Pelosi (D-CA).

There is also a continuing attempt to push for bilingual 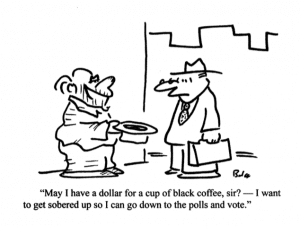 education, the daffy idea that the best approach to getting an immigrant child proficient in English is to teach him or her in another language for an indefinite period. In California, this insanity has supposedly been ended by a constitutional amendment; yet educators keep inflicting it on students stuck in the public school system.

Ironically, the multiculturalismists of the Left make it hard for those of us who favor reasonable amounts of legal immigration to convince the average citizen of its benefits. Ironically, the leftist fetish about multiculturalism – specifically, the opposition to English language requirements – is one cause of the rising tide of anti-immigrant feeling through- out the country. An unintended consequence, indeed.

Gary Jason is an academic philosopher and a senior editor of Liberty. His latest books are "Cinematic Thoughts: Essays on Film and the Philosophy of Film," and "Purchase, Power, and Persuasion: Essays in Political Philosophy," both available through Peter Lang Publishing.
View all posts by Gary Jason