Investment guru Howard Ruff used to joke about writing the perfect bestseller. It would be titled, “How I Found God and Lost Weight while Having Great Sex and Making a Million Dollars.” That seemed to cover all the bases for self-help books. It might also explain the popularity of “Eat Pray Love,” Liz Gilbert’s chatty memoir about a year she spent traveling the world trying to find herself. In the film, her husband (Billy Crudup) pleads, “Why can’t you find yourself in our marriage?” But evidently she thought

she might have misplaced herself in Italy, India, or Indonesia, since that’s where she went looking.

Notice that all of these countries begin with the letter “I.” It says a lot about the source of Gilbert’s angst and the scope of her search. The book and the movie on which it is based are less about self-discovery than about self- absorption. In the book she whines, she cries, she whines some more. But it’s hard to feel sorry for someone who has the wherewithal to travel around the world for a year. Yes, her writing style is funny and open, with short, easy-to-read anecdotal chapters. But she turns everyone into her own personal shrink. Moreover, she never seems to realize that she spends most of her time with expatriates instead of locals, so she never really engages with the local culture she sets out to embrace. Yes, she eats, she prays, and she loves, but she does it mostly with Europeans, Americans, and Brazilians.

The film based on her memoirs is less whiny, but it still lacks any depth of discovery. It ends where it begins, with Liz dabbling in meditation and in love with a man who requires that she completely change her style of life. As it begins, Liz (Julia Roberts) decides she doesn’t want to be married any longer to her handsome, loving husband. The final straw- for her? She wants him to come with her on a business trip to Aruba, while he plans to return to college for a master’s degree. That certainly sounds like grounds for separation to me!

I guess we are expected to admire her courage in being true to herself, except that her first step in that search is to move in with a handsome, loving actor (James Franco) and immediately embrace his own style of life, including his furnishings (Spartan), diet (vegan), and religion (he’s a yogi). As she puts it, “I dove out of my marriage and into Dave’s arms.” So far, she hasn’t learned a thing. You don’t find yourself by embracing someone else’s life.

Eventually Liz hits on a plan to spend a year abroad, where she will eat in Italy, pray in India, and find balance in Bali. As she tells us, “Americans know entertainment, but not pleasure.” She takes pleasure in eating pizza and pasta, in bicycle rides around the countryside, and in the friendships she makes during her four months in Italy. It’s almost insulting, however, when Liz self-righteously recommends saying a prayer before eating a feast in the home of a deeply traditional Italian family and teaches them to hold hands around the table. Director Ryan Murphy has the family matriarch react as though she had never prayed before, but come on — they’re in the heart of Catholicism! If the grandmother is surprised by anything, it would be that they aren’t making the sign of the cross.

When Liz arrives at the ashram in India, she is assigned to scrub floors as her “selfless devotional work required of everyone who stays here.” I had to laugh; it sounded so much like Obama’s oxymoronic “mandatory volunteer service” plan. If it’s mandatory and it’s unpaid, it’s slavery. And if it’s required of those who live there, it isn’t selfless. It’s an exchange.

Liz doesn’t do well with meditation. In fact, she says, “Now I’m at the source but I feel more disconnected than ever.” She falls asleep during meditation or uses the time to plan her day. After a fellow inmate (I’m not sure what else to call them) spends four weeks in silence, she ends her vow with a gushing babble of words about how healthy the experience was for her throat, but nothing about how it has affected her spirit. In short, Liz’s time in India seems to be spent in an effort to empty herself, without filling herself with anything good.

In Bali she becomes more balanced — not too much God, not too much pleasure. She learns to embrace the stillness of meditation when it is by her choice and not by an imposed regimen. But she still hasn’t found the courage to be herself. She needs alcohol to let go of her inhibitions, dance, and have fun. She also finds love again, this time in the form of a hunky Brazilian gem merchant, Felipe ( Javier Bardem). Once again, it is all about the “I.” In the book Gilbert writes luxuriously about Felipe’s “growing into the role of being my attendant knight.”

Felipe’s life is in the Pacific; Liz’s career is in New York. She writes, “I’ve been watching the expatriate society in Ubud, and I know for a stone-cold fact this is not the life for me.” Nevertheless, when Felipe suggests that they divide their time between the two places, a compromise that seems to be a metaphor for the balance she is trying to achieve, she happily agrees. Cue music and sunset.

Finding the balance between satisfying physical and spiritual desires is nothing new. The ancient Greeks developed opposite philosophic camps: the Epicureans, who embraced physical pleasure, and the Stoics, who rejected it in search of a higher plane of spiritual enlightenment. Nearly all religions incorporate some form of physical denial in the search for faith and spirituality. Herman Hesse’s “Siddhartha” is a modern example of a man who seeks fulfillment in sacrifice by living with ascetic monks, then travels to the world of business and gluttony, and finally returns to the middle ground where he finds peace of mind through a balanced serenity. In short, Gilbert’s journey is nothing new, nor is her discovery of the importance of balance. Her book is successful because the quest itself resonates within the human psyche.

What did Liz Gilbert learn after all, and what do her readers find fascinating about the book? I’m still not sure. I suppose it’s different for each reader. That’s the nature of self-help books. To me, Liz’s Italian landlady gives her the most valuable advice in the film when she says, “The only thing permanent in life is family.” It’s good to get away for a while, but it’s also good to have someone to come back to. Falling in love is a heady, overwhelming experience, but staying in love—now there’s the challenge. And the reward. 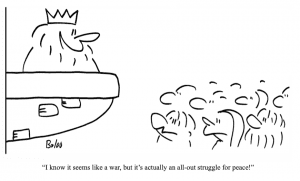 Jo Ann Skousen teaches literature and composition at Chapman University. She is the founding director of the Anthem Libertarian Film Festival, where this year she has selected several films on race in America, including “What Killed Michael Brown?” directed by Eli Steele and “Better Left Unsaid,” directed by Curt Jaimungal. Join the discussion this summer at the Elks Theatre, Rapid City South Dakota, July 21–24.
View all posts by Jo Ann Skousen