It’s interesting to see the political correctness with which free-market advocates respond to current statist interventions in the American economy. Even on talk radio and Fox, commentators express reservations about the stimulus plan and the government takeover of various industries but then indicate that time will tell whether any of these plans will work. Our president’s intelligence is invariably mentioned as a preface to any criticisms of his policies.

If a patient were to tell me that he had been advised to rub dirt into a fresh wound, as a physician, my response would not be, “Well, I come from a different school of thought on wound care, so I’m pessimistic about the outcome of your treatment. But I guess we1l find out in a few weeks whether I’m right.” Rather, I’d say, “All science and experience on the subject indicates that rubbing dirt in your wound is foolish, and bound to make your condition worse.” So why aren’t the same standards applied to economic arguments when the evidence is just as powerful?

Too many people see the present debate as one conducted among experts from different schools of thought. It is the obli- gation of anyone possessing any knowledge of classical econom- ics to unequivocally describe our policymakers as either fools or charlatans, and their intellec- tual backers in academia and the media as quacks. 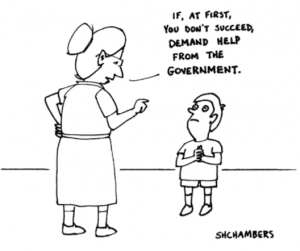