– Mandatory seat-belt laws are about public health – and maybe some other things.

Consider a case from Washington state. In Everett, north of Seattle, a policewoman pulled over a car. She asked the names of everyone in the car, and when the guy in the back seat with a dog on his lap said his name was “Antoine Carver,” she remembered him, and that his name was different. She wanted to search him, but she had to arrest him first – and for what?

She arrested him for the dog, which was a pit bull that by city ordinance was supposed to be in an enclosure. She also noted in a supplementary arrest report that he hadn’t been wearing a seat belt.

She searched him and found cocaine, methadone, and $800 in cash. He was convicted of illegal possession with intent to deliver and sent to prison for five years.

The trial judge ruled that the arrest for the dog was not valid. The car was an enclosure, so the dog was OK. The judge also ruled that the false name was not a crime in itself; there had to be some other violation of law to make it so. And there was: the man had not buckled his seat belt. That, the judge said, made the false name a crime – thereby giving the officer cause to arrest and search him, thereby finding the contraband and sending him to prison for five years.

The man went to prison and his case went to the Washington supreme court. In October the court came down with its ruling on State v. Moore (his real name). The arrest was invalid, 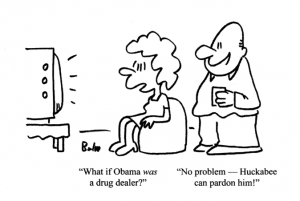 It’s not just the public health.