Beyond the entertainment value of its more childish expressions (think “The Jerry Springer Show”), disagreement is today generally avoided, in respectable society, as — well — disagreeable. It is viewed with suspicion, as something from which nice people should shrink. We realize that we will never agree about important issues, and the best we seem to be able to manage, in the interest of keeping the peace, is polite silence or a sanitized refusal to talk about anything controversial.

But if we can’t talk about anything controversial — that is to say, anything interesting — can we learn anything new? In fact, a free society is based, at least partially, on our willingness to put up with the occasional loudmouth. Many of yesterday’s crackpots are today hailed as visionaries. And to- day’s crackpot notion may, tomorrow, save the world.

Libertarianism is a generous, mature philosophy. It treats citizens like grownups. It assumes that most people are capable of recognizing a good argument and coming to understand the truth. And it’s willing to allow the same degree of freedom to everyone — even its enemies.

Too often, libertarians are caricatured as people who want the poor to starve and every individual to sink or swim alone. But we really believe in mutual respect, the power of voluntary cooperation, and the ability of the best in people to emerge. We know that coercion destroys this respect and cooperation, making enemies of those who might otherwise be friends.

No other issue can be settled before this one: what sort of a society will we be? Libertarians are sometimes accused of favoring a society dominated by contentiousness, over- competitiveness, and winning at any cost. But this is what happens to society when people try to force their will on everybody else, as too many people in modern America do, using political means to accomplish their purposes. This has not happened because there are too many libertarians, but because there are not enough. Until the rules of the game change, the game will stay the same. And nobody will win.

If we can show that the rules themselves must change, and offer a blueprint for changing them, we can rebuild the entire arena. Again, it may be possible for ideas to be discussed on their own merits. Not every decision will be viewed as life-or-death, I-win-and-you-lose. Experiments will be permitted, rewarded if successful and, if not, then shelved in favor of better options. Indeed, is there any other way a free society can be saved? 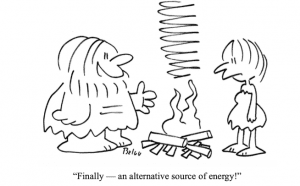 Lori Heine is a freelance writer from Goldwater country. Her young adult novel, Good Clowns, is now available on Amazon.
View all posts by Lori Heine