Hillary Clinton’s quick- out-of-the-gate start has put her way ahead of her fellow Democrats in “the hunt for the great American Catholic voter of 2008,” writes New York Observer columnist E.J. Kessler.

While criticizing the Republican-passed bill in the House of Representatives that would make it a felony to be in the United States illegally, and make it a crime to aid an illegal im- 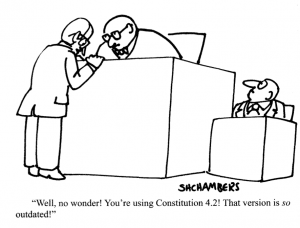 migrant, Mrs. Clinton said, “It is certainly not in keeping with my understanding of the Scriptures, because the bill would literally criminalize the good Samaritan and probably even Jesus himself.”

In 1994, of course, the Scriptures didn’t stop Hillary from devising a health-care scheme that would “literally criminalize” the behavior of patients and physicians who dared to operate outside the dictates of her master plan, with fines up to $10,000 and prison terms up to ten years for each instance. A physician who ordered a few extra X-rays for a patient he considered to be particularly at risk, X-rays not authorized under Hillary’s one-size-fits-all model, might well have found himself behind bars. Not exactly the way one would think a good Samaritan doctor should be treated for going a bit outside the lines to help a patient.

In any case, today’s Mrs. Clinton, speaking more of salvation than incarceration, has aimed her faith-based arrows at Senate Majority Leader Bill Frist, a Tennessee Republican, and other GOP leaders, stating, “It is hard to believe that a Republican leadership that is constantly talking about values and about faith would put forth such a mean-spirited piece of legislation.”

Seeking to build up her religious, “pro-family” credentials, Mrs. Clinton recently threw caution to the wind and got in bed with Sam Brownback and “man-on-dog” Rick Santorum, described by Kessler as “the Senate’s two most conservative Catholics,” to push for a bill that’ll have the government delving into the evil effects of electronic media on kids.

True, the Oscar this year for best original song went to “It’s Hard Out Here for a Pimp,” a tune that understandably causes jitters in some circles. But there’s something even scarier about Rick and Hillary teaming up to launch a government-directed investigation into which albums, TV shows, and movies are harmful to human development or insufficiently helpful in advancing the civic good.

That sounds too much like how things ended up in China, where for purity and the collective good the Maoists burned books and smashed records, destroying anything that didn’t fit into the central plan. In the Maoist model, music, books, and the performing arts exist to increase productivity, downgrade individualism, and promote collectivism.

Nonetheless, Kessler sees Hillary hitting all the right notes: “Unlike most Democrats, she sounds sincere when she employs Jesus language.” Even husband Bill, writes Kessler, can be employed to enhance Hillary’S religiosity: “Once upon a time a follower of an evangelical denomination – a Baptist named Bill Clinton – begged her to marry him.” Add some conciliatory and less-liberal language on abortion and gay marriage – plus some “pro-family” tinkering, like her bill to make cars safer for children – and Kessler views Mrs. Clin- ton, “one of the most overtly Christian politicians in the country,” as the Democrats’ best shot at recapturing the nation’s so-called values voters. “Count on this: With Catholics and other faith-based voters, Hillary Clinton will be the Democrat best positioned to speak to their issues.”

In other faith-based political news, Christian Coalition founder Ralph Reed may have joined the ranks of televangelists Jimmy Swaggart and Jim Bakker.

Reed’s 1998 email to mega-lobbyist Jack Abramoff – including the phrase “I need to start humping in some corporate accounts,” Salon’s Michael Scherer reports – set the stage for Reed to rake in more than $4 million from Abramoff’s clients, including casino-operating Indian tribes.

“Reed worked, as he put it in one e-mail, to get ‘our pastors all riled up’ – organizing his unwitting followers to oppose gambling regulations and new casinos that would have competed with Abramoff’s clients,” writes Scherer.

Explained Abramoff’s partner Michael Scanlon to one Indian tribe: “We want to bring out the wackos to vote against something. The wackos get their information through the Christian right, Christian radio, mail, the Internet and telephone trees.”

The lesson, on all sides: Be very skeptical.