In an effort to show the merits of free-market capitalism, there are some who point out how vital to the existence of wealth are the productive efforts of human beings. With the exception, perhaps, of air (and that no longer so), nothing comes without the need for people to transform it so as to make it useful. So, the argument goes, these producers and creators ought to own what they have made.

One must be careful, however, not to exaggerate. There are assets and resources one may own that have nothing to do with having produced them, let alone with having earned them – for example, one’s good health, good looks, good genes, high IQ talents, etc. Yes, most of these assets could lie dormant, but once they become apparent, those who possess them may find themselves far wealthier than those who lack them. And they own these assets. They have a right to them and what wealth derives from them – for example, the money paid for having their beautiful faces photographed and placed on the cover of Vogue or GQ. 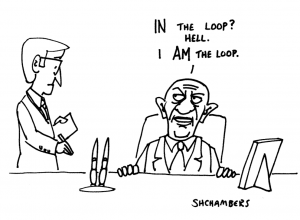 Such assets and resources are, in fact, a feature of one’s personal identity, if you will. Whatever wealth derives from them is no more available to others without one’s permission than is wealth arising from what one has produced or created anew. To claim that these aspects of oneself are available for others to expropriate is to endorse slavery plain and simple.

It matters not a whit that such expropriation results from a democratic decision. No group, however large, is authorized to raid one’s wealth, one’s resources and assets, no matter how great an idea it may have for what to do with them. The institution of slavery is an abomination even if the slaves are coerced into serving some undeniably worthy, even necessary purpose.

This recalls for me a pet peeve – all the praise that’s heaped upon those magnificent buildings, throughout the world, that were produced by slaves and serfs for tyrants, albeit with some artistic merit accompanying the cruelty involved. So many people who travel and take these in – or just see them on TV – forget how they came into being. Meanwhile, there is an inordinate amount of hand-wringing about companies that take advantage of cheap labor abroad, despite the fact that in most cases that labor has been provided voluntarily.

This hand-wringing is especially disturbing in light of the fact that there are today some very prestigious thinkers who believe that slavery is quite all right (though they would never use that term). Following the Canadian philosopher Charles Taylor and the American sociologist Amitai Etzioni, they hold that everyone belongs to his group or community, and thus that the community – which in reality means the community’s bunch of self-appointed spokespeople – is authorized to expropriate the resources that are attached to anyone, especially the advantages gained from being lucky.

The most famous political theorist of the 20th century, the late John Rawls, contended that since nearly all that one has came without personal effort – for he believed that one’s productivity and creativity are inherited or inculcated proclivities and do not confer any desert upon the creator or producer – “society” may simply take and distribute as much of it as “society” deems fair. This idea was rendered morally credible mostly through the denial that one has the right to any assets unless one has earned them.

This trap, of course, will not survive close scrutiny. My lungs, kidneys, eyes, hair – and I still have a fair amount of it, though it is all white now – were not earned by me, yet they are a part of me. Others would be treating me as an impersonal natural resource if they were to expropriate them. That is what slavery is: making use of another, of all that he or she is and has, regardless of his or her consent.

So let’s not tie the right to private property too closely to desert. One is fully entitled to assets that are part of oneself, desert or no desert.