I have felt for a long time that it is as important to preach what you practice as it is to practice what you preach. This theme is well illustrated in Peter Schweizer’s droll new book, “Do As I Say (Not As I Do): Profiles in Liberal Hypocrisy.”

Schweizer looks at a number of contemporary icons of the American left, with an eye to detecting hypocrisy. Among his subjects are Noam Chomsky, Michael Moore, Al Franken, Ted Kennedy, Hillary Clinton, Ralph Nader, Nancy Pelosi, George Soros, Barbra Streisand, Gloria Steinem, and Cornel West. He finds in each case a private life markedly at variance with the public persona.

Now, one has to be careful when playing the ad hominem game. A per- son’s intellectual claims are not disproved by his bad character. Commendably, Schweizer doesn’t attempt to discredit these pestiferous statists by looking for sexual peccadilloes or substance abuse issues. Instead, he focuses on their financial lives, which seem to me fairer game. To hear John Kerry bash the “rich” for not paying their fair share in taxes,and then to find out that he and his wife (worth $700 million) pay less than 15% of their own income in taxes, or to hear Katrina Vanden Heuval denounce efforts to end the inheritance tax, and then discover that she herself is a multimillionaire heiress, is to face a serious question. Granted, as a matter of logic, that their hypocrisy doesn’t disprove the principles they espouse, still, which principle should the listener adopt, the one espoused or the one embodied in the speaker’s life?

Consider the case of Nancy Pelosi, the ultimate San Fran- cisco big-government liberal, and leader of the Democrats in the House of Representatives. She is the daughter of Big Tommy D’ Alesandro, boss of the Baltimore Democrat political machine. She grew up in a household built around the use of political power. for personal gain, under the banner of compassion. In her career in Congress, she has garnered the high- est praise from the AFL-CIO, the Americans for Democratic Action, and the League of Conservation Voters. She is grotesquely pro-union and pro-regulation, and a fierce “environmentalist,” of course. Her favorite pastime is attacking people on her political right – which is everyone to the right of, say, Mao Zedong – as enemies of clean air, clean water, the working man, or whatever. To her, we’re all greedy, vile exploiters of the poor.

Actually, to be fair, her favorite pastime is enacting laws to increase the power of unions, trial lawyers, and the federal government. But Pelosi’s private life is all capitalist. She and her husband have a net worth of over $50 million – not bad for champions of the poor. Much of their wealth comes from real estate ventures, such as the development of the Corde Valle Golf Club and Resort in Silicon Valley. Schweizer documents how the Pelosis’ private partnership (Lions Gate Limited) managed to get approval to develop some raw land over the objections of environmentalists and other local groups, by contractually promising that the club would be primarily a public course and that the development would be ecologically friendly. But the developers stiffed the public. The golf course turned out to be primarily for the use of the ultrawealthy: the hoi polloi have to reserve three days in advance and pay $275 for a round of golf. A membership at the club costs $250,000! And Lions Gate failed to live up to the promised environmental 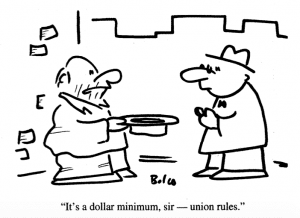 guarantees. When the San Jose Planning Commission started thinking about looking into whether Lions Gate had made fraudulent representations to get the development approvals, the Pelosis simply hired some local, well-connected lobbyists, and the Planning Commission backed away like frightened kittens.

In a similar manner, Schweizer shows that Pelosi, winner of the Cesar Chavez Legacy Award, uses companies without United Farm Workers contracts to harvest grapes on her vineyard, and she sells those grapes to nonunion wineries. Again, this darling of the AFL-CIO (and recipient of a huge amount of its money for her campaigns) owns a big chunk of two lavish hotels and a chain of chi-chi restaurants that are all resolutely non- union shops.

Next consider Ralph Nader, the ultimate corporation basher and perennial candidate for the presidency (not

Nancy Pelosi is worth more than $50 million – not’ bad for a champion of the poor.

to mention sainthood). Nader’s persona is that of the Spartan lefty, the “‘walk the walk not just talk the talk”

opponent, of the hideous ‘corporate greed that dirties the soul of America. When he visited the Soviet Union back in the 1960s, he admired the lack of consumer products, and when he returned to Russia after the collapse of the Soviet system he was dismayed to hear people praising free-market economics. To Nader, corporations are evil: they dominate governments, rig prices, sell dangerous and useless products, and generally hurt our standard of living.

But in his personal life, about which Sr. Ralph’ is very secretive, things, are different. He lives well, using a D.C. mansion that he apparently owns (though the title is in his sister’s name), earns millions from speaking and writing, and invests in – big, multinational corporations! He has net assets of about $4 million, most of it incorporate stock, such as the $1 million he owns in Cisco Systems, not to mention his stocks in major defense contractors such as GE and IBM. He controls nonprofit organizations and trusts, all secretly run, with his family members on the governing boards. His charitable foundations give away 4% of their assets· every year, the lowest amount possible to keep their IRS tax-exempt status. The remaining assets are also in corporate stock, including telecom monopolies such as Verizon, BellSouth, and Qwest.

It is no surprise that his hidden ownership of these various entities involves conflicts of interest, as when he pushed hard in speeches and legal briefs to break up Microsoft, all the while standing to gain enormously should the breakup have· occurred, or when he privately brought shares in Ford while hammering General Motors. (Remember the Corvair?) And, oh yeah, .while he praises unions, he blocks unionization of his own organizations. All of this Schweizer documents in loving detail.

His book is an enjoyable read, and in places downright hilarious. Could a comedy· writer· ever come up with a joke as funny as Michael Moore’s owning Halliburton stock? Schweizer’s investigative research on these icons of the Left, these Learjet liberals and mink-draped Marxists, is good reporting – although the lack of any real social analysis is disappointing. After finishing the book, the reader knows that many activists who attack capitalism live quite well off it, but does not know the why of it all. What motivates people who have profited so much from our free-market democracy to bash it so angrily?

This is a surprisingly subtle question, one that I don’t really have a settled opinion about – it being rather out of my field (I’m a lowly philoso-

Nader’s charitable foundations give away 4% of their assets every year, the lowest amount possible to keep their IRS tax-exempt status.

pher, not an exalted sociologist or psychologist). But I’ll hazard a few guesses, i.e., suggest a few psychological explanations of why wealthy people push leftist agendas. Different mechanisms can be found in different individuals, of course.

First, some people earn their money by manipulating the rules they help create. Consider a case that Schweizer surprisingly doesn’t discuss, Jesse Jackson. As Ken Timmerman documents in his recent book, “Shakedown: Exposing the Real Jesse Jackson,” Jackson has made himself and his family a bloody fortune shaking down corporations by threatening them with affirmative action lawsuits. Of course, he just happens to be one of the driving forces behind electing leftist politicians who push for laws expanding affirmative action. In one case, Jackson started a boycott against the Anheuser Busch beer company because (he alleged) they didn’t have enough black distributors. He changed his tune after the company gave $10,000 to his “Citizenship Education Fund” and $500,000 to his Rainbow PUSH coalition, and set up a fund to help non-whites buy distributorships. After two of Jackson’s children bought a distributorship guaranteeing them millions, Jackson dropped support for the boycott.

Then again, there is what I would call “PR compassion.” Entertainers and sports figures are typically instructed by their agents to affiliate themselves with some highly visible charity as part of their public· relations presentation. A genuine altruist would anonymously donate large amounts of money to charity, but that wouldn’t work as a public relations tool; it helps your career to look compassionate and caring, especially if your career is’ either just starting or rapidly fading. Think of all those “Live Aid” and “Farm Aid” worldwide telethon concerts, in which geriatric rock stars strut their stuff with walkers, and long-forgotten celebrities get to remind the public that they still exist.

I suspect that there is also a subtler phenomenon at work, one that I would call “warding off the evil eye.” I suspect that some successful people –

Think of all those “Live Aid” and “Farm Aid” worldwide telethon concerts, in which geriatric rockers and long-forgotten celebrities get to remind the public that they still exist.

here I have in mind certain businessmen who have become enormously rich – fear that the envious lower classes will possibly do them harm. Considering the long history of class warfare politics, this is not an irrational fear. To ward off envy, these captains of industry make a conspicuous show of being kind and caring, setting up foundations that prominently feature their names.

Finally, there is power envy. Nietzsche famously argued that slave morality, the morality of compassion, of altruism, was devised by the weak out of envy and fear of the power of the strong. This is doubtful, but there does seem to be a real envy of the powerful, harbored by such people as academics. They hold a Ph.D. in some subject or other, publish lots of articles, make tenure, but still exert no influence on society. This is galling to them. They despise people with power and do their best to bring them down. Perhaps this explains the attempts of many academics to indoctrinate their students. It may also explain the palpable bitterness of a Nader or a Moore: feeling that they are entitled to rule, they hate those who appear to do so.