Bjorn Lomborg did not believe economist Julian Simon’s well-known claim, and set out to prove that it was simple American right-wing propaganda. No one could have been in a better position to set the record straight. Lomborg is an associate professor of statistics at the University of Aarhus in Denmark. And he is also, as he puts it, an old left-wing Greenpeace member who had for a long time been concerned about environmental questions. So he assigned ten of his bright- est students to perform careful, statistical reviews of all sorts of environmental claims. And, everywhere his students looked closely, they came to the same conclusion. Simon was right: The air in the developed world is becoming less polluted, people in developing nations have more to eat, the world has more forest now than it did 50 years ago …

The first thing these conclusions led Lomborg to do was examine his personal beliefs. When he decided that it was his gut, not his figures, that was lying, he opened a debate in the Danish press.

His careful, systematic approach won the debate hands down. No honest observer who read the more than 400 articles, commentaries, and critiques that were published on Lomborg’s work would ever again believe the standard pap put out by environmental organizations. Nevertheless, the only reaction from many environmentalists was complete denial.

From a public-relations point of view, Lomborg was at a disadvantage. Statistical analysis is arcane and complex, and even intelligent, committed people find it easier to rely on critiques of Lomborg’s work than to actually to wade through his arguments. And environmentalists nudged readers down this path by providing critical commentaries that made it easy to avoid his articles.

I doubt that The Skeptical Environmentalist is any easier than the articles from which it is drawn, but it is a good deal more convenient to have everything in one place. Three hundred fifty pages of statistical argument, followed by 150 pages of notes and sources, is not an· easy read for anybody; even for those of us who suspect Lomborg is on to something important.

A t bottom, The Skeptical Environmentalist is a lot like a good encyclopedia. You’re not apt to read the thing from front to back but you do have access to some first-rate information. And it’s going to come in very handy.

Lomborg decided that it was his gut, not his figures, that was lying.

In my case, when some of my more environmentally minded friends drop by for a beer and a harangue. Here’s some of the stuff I’m going to surprise them with as soon as I can lead the conversation in the right direction:

The year the world caught fire: This is what the World Wide Fund for Nature calls 1997, the year the forests in Indonesia burned up, proving, to the WWF, that the world’s forests are out of balance. In fact, 1997 was far from a record fire year and only about one percent of even Indonesia’s forests were affected. What was affected was city dwellers who had a lot of smoke blown their way. And, when the news crews got hold of the story, the rest of 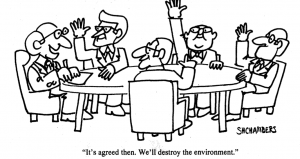 us had a lot of smoke blown our way, too.

Half the world’s species will disappear within the next 75 years: Greenpeace has been ballyhooing this statistic for years. The correct figure is more like 0.7% over the next 50 years.

Since 1940, chemical pollution has caused breast cancer to increase at the rate of 1% per year: If true, by 1996, this would have amounted to a 75% increase in breast cancer, yet the actual rate fell 18% during that period. The rates of colorectal, pancreatic, and ovarian cancer have fallen, too. Uterine cancer has dropped by two-thirds, and stomach cancer by almost 80%. Of all cancers, only lung and prostate show upward trends since 1940 – and both of these are down sharply since 1990.

The world is running out of fresh water: The fact is, there is plenty of water to go around. The problem is that the water is not going around far enough, and lots of people in the Third World still don’t have access to clean water. But this is a problem of sanitation and of delivery infrastructure: exactly the sort of thing humans are very good at fixing with technology. And we are fixing it. Over the last 30 years, even with the doubling of the Third World population, the percentage of people with access to clean, fresh water has risen from 30% to 80%, and the trend shows no sign of slacking.

Tuberculosis is coming back: Since 1950, the rate of tuberculosis has fallen 89%, declining every year except 1985 and 1991. The tuberculosis scare statistics are based on figures for those two years only; information about other years is ignored.

Everybody is going to starve to death: Hunger is another problem we are fixing through technology. Since 1970, the number of people starving has dropped from 700 million to 330 million, despite a huge increase in population.

We are killing the forests: Since the late 1940s, the amount of land covered by forests has increased from 26% of the earth’s surface to 32%.

We’re all gonna fry: Global temperatures are up just short of .8% since 1856. But, in 1856, they were .4% below normal, so it’s hard to say what the recent rise means. At the very least, we are no further on the warm side now, than we were on the cool side 150 years ago. And whether greenhouse gases have anything to do with this is not particularly well understood. A lot of the recent rise may have something to do with the sun’s long-term energy cycles.

And there’s more. Worldwide, infant mortality is down 84% since 1950, infectious diseases are down 90% since 1900, per capita real income has

All research projects need to justify their budgets. Someone who investigates something and doesn’t find a problem has investigated himself out of a job.

doubled since 1950, and illiteracy in the developing world has fallen 80% since 1910. For many scientists work- ing with developing-country issues, it has long been difficult to .reconcile findings from field·· studies in Africa, Asia, and Latin America with the pronouncements from environmental pressure groups in, the industrialized world.

The question that hangs in the air is, why should this be? Lomborg spends an entire chapter suggesting reasons why we hear so much bad news. As he sees things, we get information on the environment from three sources: research, organizations, and news media. All three have reason to be biased in favor of bad news.

For one thing, all research projects need to justify their budgets. Someone who investigates something and doesn’t find a problem has investigated himself out of a job. And an awful lot of environmental research involves taking measurements of things that have never been carefully measured before. So new findings turn up like periodic oxygen shortages in the Gulf of Mexico. Without any previous measurement, it’s hard to know what, exactly, these fluctuations mean or whether they have anything to do with human activity. That they might mean something bad is always one of the possibilities. And it’s the only one, of all the possible explanations, that is of much interest outside the scientific community. So it gets featured in the press.

Organizations have their own biases toward gloomy reporting. Once a scientific specialty gets rolling, it becomes very hard for a scientist within that specialty to challenge the premises upon which his field is based. Specialties that reach this point begin to create their own reality, like Freudian analysts manufacturing and curing neurotics. In the case of environmental research, the received wisdom is that things are terrible and get- ting worse. Otherwise, why would you need environmental researchers?

Of course, it’s not just scientific organizations that play a role in what we hear. Environmental organizations have powerful interests in making sure their supporters continue giving them money to take care of penguins or possums or whatever, and that also plays a big role.

Similar dynamics operate in the mass media. For the news media to have an audience, news has to be interesting. Well-fed babies in Africa simply are not news in the same way starving kids in Ethiopia are news. So we never hear about happy, well-fed African babies.

Or the media can cherry-pick the bad news from a much more complicated event. Remember the fuss over El Nino in 1997 and 1998? All the talk was about weird weather and we were told how cities were bracing for the climate event of the century. El Nino was blamed for everything from mudslides in California to melting ski slopes in Colorado to the falling value of Disney stock.

But there was another side to EI Nino you did not hear: The 850 fewer deaths from cold while the East Coast sunned itself through the warmest winter in memory, huge energy savings from lower heating costs, reduced damage from spring floods, and billions saved because, in 1998, not a single Atlantic hurricane hit the United States.

And, always, there is the matter of guilt. Guilt makes a story more personal, it lets the teller point the finger and, I suppose in liberal society, guilt is the preferred emotional state. Given a natural disaster that can remotely be tied to human greed or stupidity, newspeople can lay on guilt thicker than lard at a Southern fryoff.

So where does all this leave us?

It leaves us with a book. Hard as it is to argue against all the so-called authorities whose financial and personal biases fit so directly into a single, dystopic world view, at least ~omborg has given us some real authority to back up what a lot of us suspected in the first place.

Now, no environmental true- believer is ever going to listen to you, or to Lomborg. But, it can help a lot of other people, people who care about the environment, but aren’t committed to the end of the world, see things a bit more realistically. And that will be good for all of us.