On November 3, in a close vote, the voters of Washington state appear to have approved Referendum 71, creating civil unions for same-sex couples with all the legal rights and responsibilities of marriage. The name “marriage” was left off only for purposes of reassuring the timid. Proponents wanted, desperately and insistently, to win a statewide vote on gay marriage after losing 31 statewide votes across the United States, and as Liberty goes to press it seems they have done it.

The vote is a milestone. Five other states have instituted gay marriage, but never by a vote of the people. Before 2009 it was always done by a court; the earliest ruling that still stands is that of the Massachusetts Supreme Judicial Court in 2003. But for a republic to decide a question as deeply cultural as same-sex marriage by a vote of nine citizens is a kind of cheating. The public resents judges making the decision, and in states with the right of initiative and referendum – the Western states and a handful in the Midwest and Northeast – voters have tended to take the matter into their own hands. The other votes were constitutional amendments referred to the people by legislatures.

Thus the justices of the California Supreme Court proclaimed gay marriage in May 2008 and were overruled by voters that November. In 2009, same-sex marriage was approved by the legislatures of Vermont, New Hampshire, and Maine. Maine’s voters, the only ones of the three with the right of referendum, repealed the law on November 3.

Maine, I think, will revisit its decision. Washington state will not. The voters’ approval will not be contradicted by the legislature or the state’s supreme court. Except for the label “marriage,” the thing is done.

Eventually same-sex marriage will come to all 50 states. Two things make it inevitable. The first is the social acceptance of openly gay couples. The second is their adoption of children. Marriage follows. It is taking time because of older people’s discomfort with homosexuality, but younger people are much more accepting of it. They see the question as one of fairness and tolerance, and also as a practical matter of specific legal rights that adults and their dependent children need. Over time, their views will prevail, in liberal places first and conservative places later.

On matters like this, Washington is one of the liberal places. In 1970, three years before Roe v. Wade, its voters legalized abortion. In 2008 they legalized assisted suicide of the terminally ill, becoming the second state to do so, after Oregon.

Always, these things occasion a fight. As in California, the earlier fight in Washington was in the courts. Same-sex couples in King County, which includes the state’s largest gay neighborhood, in Seattle, brought suit to overturn the state’s Defense of Marriage Act, passed in the late 1990s. In Andersen v. King County (2005), the gay couples lost in a 5-4 decision.

The five “no” votes on the court included that of the court’s libertarian, Justice Richard Sanders. He signed the concurring opinion of the court’s populist conservative, Justice Jim Johnson, arguing that the law defined marriage as one man, one woman, and that a court had no business changing that. Legally, I think, they were right; and politically I know they were. The issue is one of social acceptance, and that is a thing best done by the people.

To say so was to be labeled as a homophobe and a hater by gay radicals who saw themselves under permanent oppression. The fact was, though, that public attitudes were changing. In 2000, California voted 61°,10 against gay marriage; in 2008, it voted only 52°,10 against. The arithmetic suggested that proponents were losing 1% of the electorate per year.

In Washington, the loss in Andersen v. King County led to a push in the legislature, which is controlled by Democrats. Following the strategy of a gay state senator from Seattle, the legislature tackled the issue piecemeal. In 2007 it created gay civil unions with rights of hospital visitation and inheritance. In 2008 came rights over probate and trusts, community property and guardianship; in 2009 the rest of marriage – adoption, child support, pensions, business succession, etc. – all except that lightning-rod name, “marriage.” The radicals denounced that senator, but he won by doing it his way. The new law was supposed to go into effect on July 26, but opponents filed a referendum to put it on the ballot so the people could vote against it. Something similar happened 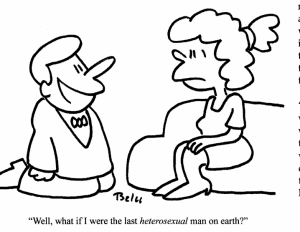 in California and Maine. Public sentiment, however, was different in Washington. One of the state’s prominent anti-gaymarriage pastors sensed it. He publicly advised his fellows against the referendum, arguing that they could succeed in reaching the ballot and lose the vote, and that if they did, their goose would be cooked.

They ignored him, and began collecting signatures for Referendum 71.

The gay activists felt rooked. They had won in the legislature, the governor had signed their bill, and now these Neanderthals were trying to take away their rights. A fellow at WhoSigned.org got his name in the news by threatening to file a public-records request with the state, get the names and addresses of the petition signers on a CD, and post them on the internet. That way, you could look up your neighbors and coworkers and see whether they were homophobes. The damned Neanderthals would be outed! This was taken by the evangelicals as a threat, which it was. Columnist George Will called it “thuggish liberalism.”

The anti-gay-marriage group sued to block disclosure of the names. Within a few weeks the question went all the way to the U.S. Supreme Court, where Justice Anthony Kennedy signed an order keeping the names private.

There ensued an argument about these names. Each side made an analogy. One side said that citizens who signed petitions were acting as legislators. Would we allow legislators to hide behind a curtain? No. The other side said that the ones acting like legislators were the referendum sponsors, and everyone knew who they were. The petition signers were like voters, and voters have a secret ballot.

With Justice Kennedy’s order, that side won.

The proponents of R-71 needed 120,577 valid signatures. They turned in 137,689 – a thin cushion, given the number of people who sign without being registered to vote. The secretary of state’s staff, who usually estimate the valid signatures by sampling, had to check everyone. There were enough, barely, and R-71 was put on the ballot.

The gay-rights people sued, claiming that 35,000 signatures that had been accepted should have been rejected, for various reasons. They lost. R-71 stayed on the ballot.

R-71 was, simply, the legislature’s law on same-sex unions. The people who had filed the referendum, collected the signatures for it, and fought in court to get it on the ballot did all this to give voters the chance to vote against it. The people who had condemned R-71, tried to dissuade voters from signing, and sued to disqualify signatures, did all this to defend the same-sex marriage law from a public vote. Having lost that struggle, they had to switch gears and convince people to vote for it.

On the ballot, the choices for R-71 were “approve” and “reject.” There was some confusion about that; the people who had denounced and vilified the measure for three months were suddenly urging approval in soft and caring tones, and the people who had pushed R-71 through all that opposition were urging its rejection. That is the way Washington referendums work. A law had been passed. Absent the referendum, the law would go into effect. The people who put it on the ballot were trying to kill the law, not approve it.

Then the battle entered a new phase. In the war for donations the gay-marriage side vacuumed up five-sixths of the money, including checks of $100,000 from Microsoft, with $25,000 from its CEO, Steve Ballmer, $25,000 from its patriarch, Bill Gates, and $10,000 from Vulcan, a company headed by Gates’ old partner, Paul Allen. There was money from the ACLU, the state’s largest utility companies, and some of its largest unions.

The other side got money from Focus on the Family, and groups like that; and a bunch of $50 contributions. There were marches:. for R-71 by gays and their friends, and against R-71 by evangelicals. Most notable were the immigrants from Eastern Europe and Russia, who found the whole idea of gay marriage shocking and against God. There was an ad on the radio saying that if the measure passed, schoolchildren would be reading stories about families with two daddies, even in kindergarten. In my neighborhood, an extremely liberal one, there were signs on church reader boards to vote for R-71.

People argued on and on about whether it was or was not gay marriage. It was. Then election day. The news quickly came from Maine that gay marriage was defeated there. From Washington state there was nothing, because Washington votes by mail, and the ballots were not all in. It looks strongly, however, that when they are, the Evergreen State will disagree with its 31 brothers.

Why there? A lot of little reasons, but the big one was simply that it was time. Some state was going to be first. That state turned out to be Washington.