The photos here are of a picnic structure in Seattle’s Woodland Park, near where I live.

One picture shows the picnic shelter as it was in February 2021, when it was walled in with tarps and used as a squatter’s home. You can tell it’s a picnic structure from the row of raised barbecue pits along the side. 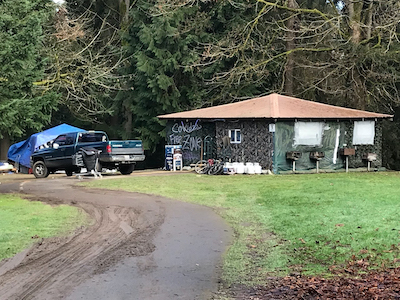 By February 2021 the structure had been privatized for at least two years. It had electricity, stolen from the city; in the winters of 2020–21 and 2021–22 it was decorated with Christmas lights. For much of the time it had a truck parked next to it, and lately it has had chairs where the squatter could sit and survey his domain.

Another photo of the same structure was taken on May 10, 2022, after the city began clearing out the encampment. Note the pile of trash. The mound of tarps and broken lumber was much higher, but the backhoe in the woods behind it has reduced it to a more respectable lump. According to the story in the Seattle Times, the camp had some 40 tents and motor homes (see photo) as well as the two picnic structures, all of which generated mounds of junk. Cleaning it out involved a fleet of city vehicles, including, as another photo shows, a truck merely to haul out the propane tanks. 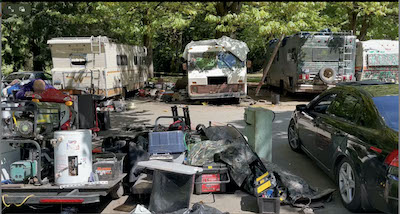 Stapled to a sign — “PARK CLOSED” — was a notice from Seattle Parks & Recreation dated May 6:

The danger to health is mostly to the occupiers themselves. I’ve seen a guy sitting at the entrance of the public toilets, shooting up. My objection to him is not that he is a danger to the public, but that he has commandeered the property for a use that discourages the rest of us. 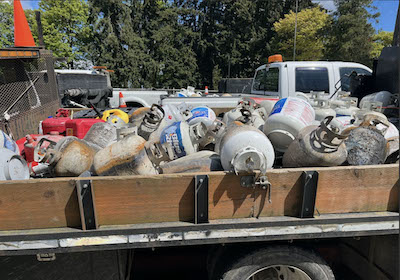 I would have preferred the notice to say:

The city is removing squatters from this park because it is not a campground. The persons camping here have never received permission or paid any rent or fee, and have been warned many times that they are in violation of city ordinance.

I don’t buy the argument that these people are all so poor that they can’t rent a room somewhere. In the photo from 2021, you can see a bicycle and a decent pickup truck. I see these guys with mobile phones. The Left argues that Jeff Bezos and Amazon have created so many tech jobs that they have priced these poor people out of housing, but even if that were true, they wouldn’t have to camp in a beautiful city park. They did it because they could — and now they can’t.

The previous mayor, Jenny Durkan, did little to remove them until after last November’s election, in which she didn’t run. Of the two candidates, Bruce Harrell promised to clean them out and M. Lorena González promised not to — and Harrell won decisively. After that, Durkan cleaned up an encampment that had a dozen rolling-wreck motor homes in view of old U.S. 99. But many of the campers migrated a few hundred feet up the hill to this spot in Woodland Park. Harrell, who took office in January, has dragged his feet on Woodland Park until now. But he has finally done what he promised. 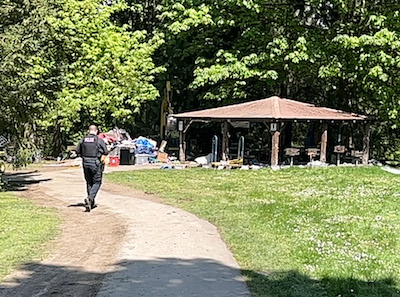 At the camp there was a handpainted cloth sign saying, “Housing for all! Services not sweeps!” (This is a “sweep.”) What I didn’t see, or read of, were any protesters. There have been some before, but there are none now. The reason, I think, is the election last November. The people who support the squatters know from the election returns that the public is not with them. This town may be 85% Democrat and independent, according to a poll conducted last year, but apart from the leftmost 5%, it is not socialist. Which means there are limits to its progressivism. Proving this has taken an uncommon amount of aggravation and delay, but it still feels good when it happens.