First, it demonstrated how seriously ABC is hurting – and it deserves to hurt. The same might be said about all three old-line networks.

For generations, the networks used government regulation to maintain monopoly power over the nation’s sources of information. Their core audience consisted of people too lazy to read a paper and too slow-witted to wonder why there were only three sources of television news and why all three sources said almost exactly the same things, with almost exactly the same tone and emphasis.

When cable TV and the Internet came along, and were allowed to compete, the networks’ core audience began to shrink. It is very shrunken now. And it’s not an audience that advertisers want: it’s too old, too poor, too dumb. So this is the audience of ABC News; and, according to David Bauder of the Associated Press, “at ABC News . . . ‘Nightline’ has been considered a flagship.” The fact that ABC wants to scuttle it shows how bad off the network really is. And the other two networks aren’t far behind in the slide toward oblivion.

Second, the attempt to drop Nightline shows how bad off ABC’s parent company is. That company is the Walt Disney outfit, which bears as much similarity to Walt Disney himself as a sweet little dachshund bears to a monster attack dog. For a decade or so, the Disn~y company has been waging a successful campaign to cheapen and stupidify American culture. It has also waged a successful legislative campaign, inducing Congress to pass a radical revision of the copyright law (the appropriately named Sonny Bono Copyright Term Extension Act). This revision will keep Mickey Mouse out of the public domain until he’s so old that his tail falls out.

Now, however (hallelujah!), Disney’s profits are flat and it’s closing down some of its operations. The plot to eliminate Nightline was an example of its desperate search to cut something. Fine. I hope this is also a sign that someday soon, the cats will finally get hold of Mickey, and do their duty.

Third, the Nightline crisis focused attention on how really, really bad network news has always been. Don’t talk to me about Edward R. Murrow. I’ve listened to the tapes. I’ve seen the videos. If you think that what Murrow did was high-quality news reporting, then you have exceptionally low standards. But that’s what the networks have always had, and rigorously maintained. Here’s the proof. 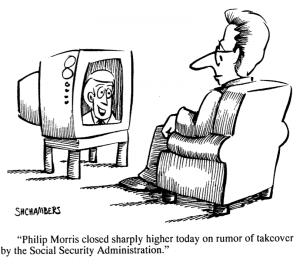 When Nightline came along in 1980 (as, initially, a series of reports on Jimmy Carter’s Iran crisis, a crisis that, luckily for the show, quickly became chronic), it impressed almost everyone as a welcome relief from all other network “news” fare. And it wasn’t any better then than it is now.

NightLine’s highpoint, then and now, is the moment in every broadcast when Ted Koppel interrupts a long-winded guest to say, even more long-windedly, “Now, please allow me to interrupt you for just a moment. Some of our viewers may not have a complete understanding of what you mean by such terms as ‘Congress,’ ‘bill,’ and ‘law.’ So, for the benefit of our viewing audience sitting at home right now, would you please clarify the process by which ‘Congress’ transforms what you are now calling ‘bills’ into what you a few minutes ago called ‘laws.’ Thank you very much. Please proceed now.” It’s almost impossible to imagine a drearier interview style. Anyone who had a style like that at Fox News would be bounced during the first commercial.

But before Nightline came along, no one ever interrupted a guest on television, no matter how incomprehensible, turgid, or tedious the guest had become; after all, he wouldn’t have been invited in the first place if the network didn’t like him. Koppel broke the interruption barrier and was hailed for his bold imagination and inspired intuitions in the field of broadcast news. That’s how bad the situation was in 1980. Now 22 years have passed, Koppel is still doing exactly the same thing, and the response from critics, pundits, and other people who purportedly spend their whole lives caring about the intellectual quality of television news is even more hysterically favorable to him than it was in 1980. That’s how intellectual they are.

Well, Letterman wouldn’t come to ABC, so Koppel is staying. At least for the moment. And, on second thought, I hope that the moment is long.

In his first inaugural address, Thomas Jefferson said, “If there be any among us who would wish to dissolve this Union or to change its Republican form, let them stand undisturbed as monuments of the safety with which error of opinion may be tolerated where reason is left free to combat it.” In that spirit, I say, If there be among us any tedious, irrelevant, pseudo-news programming, created in the days of the network news monopoly, let it stand undis- turbed as a monument to the intellectual pretensions of the modern liberal elite and to the freedom of choice that more rational viewers now enjoy.0