South Park and,l have had an off-and-on relationship. When the cartoon series first came on TV, I couldn’t get enough of it. I loved its outrageousness. And it was a perfect example of how comedy works.

All comedy works in the same way: it’s the sudden discovery that what we feared, what we were taught to respect, what we worried about, what we were intimidated by, isn’t anything that we need to worry about after all – dude! When the South Park kids went around calling each other #*%#@&! and @*@#$%!, what they were really saying was, don’t be intimidated by any of those rules you learned. (Also, they just wanted to say #*%#@&! and @*@#$%! But never mind; it’s not important for the theory.)

That was the point of the whole business about Kenny’s death. Kenny, as you know, is the little kid who mumbles his way unintelligibly through every episode, before getting killed in some ridiculous way, whereupon the other three kids yell, “Oh no! They’ve killed Kenny!” and then go about their business as if nothing ever happened. And it didn’t happen, not really; because in the very next episode, Kenny is back, ready to be killed again – no explanation required. It all goes to show that if you just remain a total nonentity, you never need to worry; you never even need to die, not really.

.I know it’s stupid; the whole show was stupid, right from the start. But it taught the most satisfying lesson that anyone could ever learn: whatever you do, man, that’s okay. And if you can’t understand even that lesson, don’t worry; in the final analysis, even the most abject stupidity is perfectly okay. At the end of Aristophanes’ great comedy The Birds, humanoids exactly like the citizens of South Park conquer the immortal gods themselves. It’s the ultimate dream – to be rewarded, not in spite of your failings, but because of them.

But then, just when I was starting to compare South Park to Aristophanes, or even Cheech and Chong, something happened, something unexpected and dreadful. I got tired of sheer stupidity.

How can this be? I wondered. I didn’t know.. I just knew that it was true. Maybe it had to happen. Sheer stupidity has an evil twin, which is sheer insipidity; and they’re rarely seen alone. I knew that South Park and I would have to call it quits when SUVs showed up in my neighborhood with rainbow decals on one side of the rear window and a South Park kid on the other. The hip bistro down the street started setting out cookies in the shape of South Park kids. Worse still, authorities on atheism started going on TV to appreciate South Park’s analysis of theology. Obviously, stupidity wasn’t safe from its own success. It couldn’t stay stupid; it had to turn itself into one more stinking thing you had to think about.

So I stopped watching the show.

But now … I’m back! The recent South Parks have demonstrated that even if nothing can long endure as radical, gut-level, absolute, content-free nonsense, nonsense may at times succeed in becoming Effective Political Satire; Le. satire that I agree with.

I first noticed South Park’s swerve from far left to far right when I saw a rerun of its Rain Forest episode. The episode involves an environmentalist teacher who takes the South Park kids to some dilapidated non-American country to protest against the capitalist plot to destroy 1/ the rain forest,” and therefore mankind. Things immediately go from bad to worse. Not only do the kids, and even the teacher, find out that the local people know more than they do about the environmental dangers that they supposedly.confront, but the whole group winds up getting rescued from the deadly perils of the jungle itself by a bunch of lumber guys with enormous bulldozers.

Eggzullunt! And last winter was even better. It didn’t take South Park three minutes to produce a hilarious satire of the disputed presidential·election, representing it as a contest for homeroom president that quickly mushrooms into massive litigation, until the kids, in their stupidity, decide that the whole thing is just a boring, repulsive game, and they don’t have to play it anymore.

And now we come to South Park’s Taliban season. The sublime Osama bin Laden episode first represents OBL as the feckless villain in a Bugs Bunny-style comedy; then it tires of him and shows a guy blowing his head off. Funny! But easy. The harder part was dealing with the America issue.

South Park’s sole reason for existence, once you get beyond sheer stupidity, is to laugh at the American way of life. But we’re living in a time when the ideology of the Americans who matter (at least from the media point of view) is anti-Americanism. When you think about it, anti-

Americanism is the American way of life, for them. That’s why national news magazines run “Why Do They Hate Us?” on their covers, with “they” meaning that purported enormous part of the world that, presumably for good reason, spends most of its time hating the USA. This attitude toward America is so prevalent among the quick, the slick, and the hip as to constitute a powerfully intimidating force for everybody else.

Well, that’s the kind of thing that comedy is meant to take care of, and South Park has done so.

Its method was to send the kids to Afghanistan and confront them with four Afghan kids who look exactly the same as they do, except that they’re wearing those funny clothes.

I knew that South Park and I would have to call it quits when SUVs showed up in my neighborhood with rainbow decals on one side of the rear window and a South Park kid on the other.

It’s the perfect postmodern moment, the perfect nexus of opposed perspectives, and nothing but perspectives – or so a hip, slick, postmodern analyzer would put it. That’s not the way the South Park kids put it, though. Their response is, “That doesn’t make sense! You’re just a buncha buttholes!”

There’s more. There’s the almost equally delicious moment, later in the same episode, when the American kids say goodbye to the Afghan kids. The Afghans reaffirm their hatred for the Americans, and the Americans respond, with a greeting-card wistfulness, “Maybe someday we can learn to hate you, too.”

Now, if you’re afraid that South Park is self-censoring its critique of America just because there’s a war going on, you can check out the subsequent episode in which the kids go to the airport and a security guard discovers that Kenny is car- 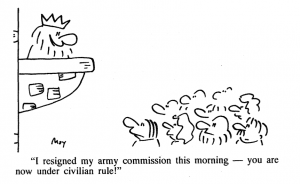 rying a pair of toenail clippers. Being one of the few truly conscientious airport guards in America, the guy whips out a gun and blows Kenny away.

So don’t worry, America is still the object of South Park’s gross, obvious, unfair, disgusting satire. But South Park’s satire of America’s enemies, at home and abroad, has broken the unfairness barrier. It has arrived at the gross, obvious, disgusting, but perfectly fair and, indeed, irrefutable truth: They are just a buncha buttholes.