For three years now, the major news media have been bashing Bush with the allegation that he, or Chene~ or Rove, or someone else in his administration, deliberately “outed” Valerie Plame, the wife of Joe Wilson, in retaliation for Wilson’s pushing the story that Bush had lied in his 2003 State of the Union address, in which he repeated the British allegation that Saddam Hussein had sought to buy uranium from Niger. The media were shocked, shocked, that leaking was going on! and demanded the appointment of a special prosecutor. They got what they wanted. Patrick Fitzgerald was anointed, and over the past three years has spent a ton of tax-payer money investigating everybody but managing only to get an indictment of Scooter Libb~ Cheney’s chief of staff.

With the admission by Richard Armitage, Colin Powell’s deputy, that he was the source of the leak, the whole story has been shown to be a pack of lies. Wilson’s allegations were long ago debunked, of course. But the story lingered on, with the media hoping to bring down Rove. But now we know that Bush, Cheney, Rove, and Libby were innocent all along, and that Armit- age, and Powell, and Patrick Fitzgerald knew it all along. The silliness of the major news media is nothing particularly surprising. The treachery of Armitage (and Powell, for that matter) is harder to explain: how do you watch innocent men get attacked and indicted, when you know that they are innocent, because you committed the”crime”?

But the big lesson here is the inherently· abusive nature of the office of special prosecutor. You give a person unlimited time and money to get indictments for any crime he can find, and eventually you will get some indictments. But you will also get injustice. In this particular affair, there never was a crime. Plame was not an undercover agent at the time her name was leaked, nor had she been one for a long time before the leak, and Fitzgerald knew it, which is why he never even tried to get an indictment of anybody for that bogus offense. No, he pulled the old prosecutorial trick of forcing people to testify to investigators and grand juries repeatedly, over months and years, until somebody trips up and contradicts himself – in which case you’ve “got him” for perjury. After the millions of bucks wasted, we’ve got Libby for perjury even though we know he had absolutely nothing to do with the leak.

When will we learn that special prosecutors are worthless as instruments of justice? You would think that the Democrats in particular would have learned that lesson after the Clinton- Lewinsky debacle, but no, they were behind the current pseudo scandal, hoping to nail their archenemy Rove, and it has now blown up in their faces.

Just kill the whole concept. If you don’t like a president – be it Nixon, or Reagan, or Clinton, or Bush – just vote against him. If you hate his guts, then vote against him and donate a ton of money to his opponent. But quit using special prosecutors to do your political work. 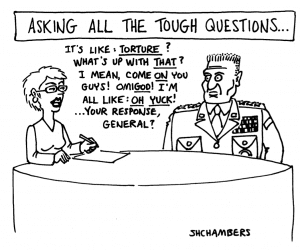 Gene Healy is a writer living in Washington, D.C. He maintains a blog at genehealy.com.
View all posts by Gene Healy