The traditional Israeli response to, say, the assassination of its Olympic team or the kidnapping of a soldier has been selective retaliation by its intelligence agency, called the Mossad.lts operatives would take out killers any- where in the world (including Arab countries), send soldiers along with an airplane to rescue Israelis detained in Africa, or take a hostage that could be bartered for a kidnapped soldier, with a finesse and respect for noncombatants that customarily won respect from the rest of the world.

Why didn’t that happen recently? Has the Mossad become less intelligent? Does Ariel Sharon’s successor have less respect for its competence? What isn’t yet known? Instead, the new Israeli premier has bombed a country, killing civilians along with putative perpetrators. That move reflects not traditional Israeli moxie but, dammit, the strategy of George W. Bush! And Israel’s action is not likely to win the world’s approval or be more successful than Dubya’s.

It is also distressing to realize that Israel has fallen for a provocation, which has traditionally been an Israeli strategy. When Ariel Sharon and his troops in 1990 peacefully marched into the Arab quarter of Jerusalem’s Old City, the move provoked violent Palestinian responses, an intifada, that in turn persuaded the Israeli public to give Sharon’s party enough 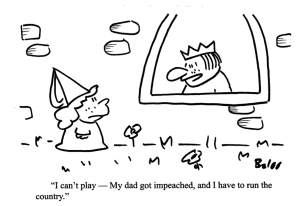 votes to make him premier again. Only he, they thought, would be tough on violence within Israel. Had the Jerusalem Palestinians not fallen for the provocation, Sharon would have probably remained a farmer.

My suspicion now is that Hezbollah knew in advance that kidnapping an Israeli soldier would provoke an Israeli response that would in tum warrant Hez’s unleashing its arsenal of previously hidden missiles directly at Israeli cities. Why didn’t the Mossad know and warn this would happen?