The University of Pittsburgh Medical Center’s Shadyside Hospital, where I spent some time last year being treated for pneumonia, gets five stars – the highest possible rating from HealthGrades for the quality of its gastrointestinal and pulmonary care. My wife and some nurses thought I earned zero stars for patient behavior.

Besides being convinced early one morning that I was being clandestinely transported by two nurses to a nearby basement in Oakland so they could get information from me by injecting me with truth serum, things seemed to me to be relatively normal. I mean, after all, it’s a high drama situation in there.

The basement thing started when I awoke at 5 a.m. and saw a tall nurse with a beehive standing at the foot of my bed holding a large hypodermic needle and asking for a blood sample in what sounded like a thick Nazi accent. I’d seen a hairdo like that a few months earlier on some woman in a movie about the last days in Hitler’s bunker.

At 5 a.m., the room looked different – yellow had become gray, and gray-white. The walls were a different color, a different configuration. I couldn’t see my books or flowers. “Where am I?” I asked the Nazi nurse. “The doctor ordered the blood work,” she replied like a good soldier. “You’re in Shadyside. You were admitted yesterday with pneumonia.”

“Right,” I said to myself, knowing I’d been admitted more than a week earlier. “Shadyside the neighborhood, or Shady- side the hospital?” I asked suspiciously, sure I was onto something.

I could see shadows moving. I looked around and saw that the wall behind my bed had turned to glass. People were strolling back and forth behind the glass, like on a busy sidewalk. It hit me that they were all people who had died in my room.

What brought me back to reality, what showed me I was in the right room, were three Halloween drawings from my granddaughters hanging on the room’s bulletin board – a big orange pumpkin by Grace, 3, and a colorful spider and an artistic witch’s hat by Sarah, 9.

All of the above I can chalk up to a bag of pain medication hooked up to my body that allowed me to self-administer morphine. Afraid of the intense pain·that might be coming, I hit the little doorbell-like button until I had used a whole night’s supply in four hours.

Still, my wife says I can’t blame everything on the drugs. In the emergency room, I demanded doctors who belonged to ethnic groups with the highest numbers of Nobel Prize winners in medicine – but that, too, might have been the drugs talking. The doctor inserting a chest tube into my lungs said he’d never seen someone so morphine-resistant.

Every day, I dressed like less than a good five-star patient. One nurse told my wife that I was trying to regain the·control that I’d lost to my illness. I never wore one of those no-back hospital gowns invented by Seymour Butts. I shaved every morning and.put on a golf shirt, pants, and tennis shoes before tuning into “Imus in the Morning.”

“You always look like you’re ready to leave,” said one of my doctors. “You can’t will your way out of here,” said another. In the end, though, things got better fast enough so that a more serious operation wasn’t necessary, and when the time came, like a broken clock that’s right twice a day, I was ready to go.

On the upside, the night before I left the hospital, astronaut Neil Armstrong stopped by in a dream and talked about how it wasn’t right that birds are surgically cut for display in zoos, parks, and aviaries in a way that prevents them from ever flying again. I agreed. I thought we should work on getting that stopped: surgery should set us free.

During my worst days in the hospital I thought about what Marjorie Williams had written about her own mortality, about her family. Williams, a writer for the Washington Post and Vanity Fair, died of liver cancer at age 47. Her husband, Timothy Noah, a senior writer for Slate, put together her final writings into a book, “The Woman at the Washington Zoo: Writings on Politics, Famil)’, and Fate.”

In one of the essays in the book, “Hit by Lightning: A Cancer Memoir,” Williams writes about her fears for her two young children – Will, 12, and Alice, 9. What would it be like for them after she’s gone? “Who will talk to my darling girl when she gets her period? Will my son sustain that sweet enthusiasm that he seems to beam most often at me? There are days I can’t look at them – literally, not a single time – without wondering what it would do to them to grow up without a mother.”

I think, too, about how it would be different for my wife, my two sons, my two young granddaughters, without me – especially for my wife. I don’t like to think of her growing old by herself. It would be better if she found someone new, but I don’t trust him.

Williams recalls telling her husband, “I don’t want to end my life in some hospital barfing in the name of science.” A nurse told me once that no one got off the third floor where she worked. People were sent up there to die. I pictured them lined up in long rows of beds, unconscious, kept breathing and earning money for someone by way of machines and tubes.

It seems better when it ends at home, quickly, without warning, without all the pain and helplessness and contraptions. My grandmother died cooking her morning eggs. My mother died watching TV at home. But that might not be the easiest way for the surviving husband or wife. John Leonard, reviewing Joan Didion’s “The Year of Magical Thinking” for the New York Review of Books, describes how life, as it was, ended for Didion: “Her 70-year-old husband, John Gregory 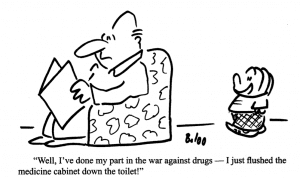 Dunne, has dropped dead of a massive heart attack in their living room in New York City, one month short of their fortieth wedding anniversary. She can’t erase his voice from the answering machine, and refuses to get rid of his shoes. Her 38-year-old daughter, Quintana Roo Dunne Michael, has only been married five months before she is’ out of one hospital

I awoke at 5 a.m. and saw a tall nurse standing at the foot of my bed holding a large hypodermic needle and asking for a blood sample in a thick Nazi accent.

into another, with a flu that somehow ‘morphed’ into pneumonia and was followed by a stroke. One morning in the ICU Didion is startled to see that the monitor above her daughter’s head is dark, ‘that her brain waves were gone.’ Without telling Quintana’s mother, the doctors have turned off her EEG. But ‘I had grown used to watching her brain waves. It was a way of hearing her talk.'”

Didion writes of death as an “unending absence,” a vacant time that comes after a quick death or after the catheter lines and breathing tubes and readouts and hopelessness: “We have no way of knowing that the funeral itself will be anodyne, a kind of narcotic regression in which we are wrapped in the care of others and the gravity and meaning of the occasion. Nor can we know ahead of the fact (and here lies the heart of the difference between grief as we imagine it and grief as it is) the unending absence that follows, the void, the very opposite of meaning, the relentless succession of moments during which we will confront the experience of meaninglessness itself.”

She explains the craziness that follows, the dislodging of her talent and wisdom and happiness: “We might expect if the death is sudden to feel shock. We do not expect this shock to be obliterative, dislocating to both body and mind. We might expect that we will be prostrate, inconsolable, crazy with loss. We do not expect to be literally crazy, cool customers who believe that their husband is about to return and need his shoes.”

Asks Leonard: “If Joan Didion went crazy, what are the chances for the rest of us? Not so good, except that we have her example to instruct us and sentences we can almost sing.”

On my better days, I could walk the halls. The doors were open and some patients were crying in pain. Others were sleeping in bright lights with their mouths open. Posters on bulletin boards showed what else could go wrong – hips breaking, knees tearing, lungs deflating, hearts stopping and in the rooms I saw the nuts and bolts and hoses and pumps that labored to keep patients going.

At night, a doctor was connecting two bees to my chest. The bees were attached to thin wires, about a foot long, so they could take off and land but not get away. “These will do the job,” he said. He explained that the old bees, the ones he had just removed, were too small. The room’s TV was on, turned to news about an earthquake in Pakistan. There wasn’t enough medical help. Ten thousand people might die. I felt lucky. I had 20 people working on me. The next day the estimate doubled to 20,000 dead, and then to 50,000. Finally it hit 76,000, about 20,000 more than the number of Americans killed in Vietnam in a decade.

I had a “procedure” scheduled for the next day – a hole that needed to be put in my side in order to drain fluids from around my lung. I didn’t ask how big the hole would be. Knowing ahead of time was like knowing a day ahead that I was going to be stabbed.

I was in the car that night with my wife, driving down a long, steep.hill. When we got to the bottom, there was water coming up, a swamp covering the road. We couldn’t go any further. I turned the car around but now there was water covering the road back. We couldn’t move, and coming straight for the car, right at our windshield, were giant snakes, larger than the car, twisting across the top of the’ water.

On March 27, 1997, just a few days before he died of liver cancer, Allen Ginsberg wrote in “Dream,” one of his final poems:

“There was a bulge in my right side, this dream recently – just now

I realized I had a baby, full-grown that came out of my right abdomen

While I was in hospital …

Worried and pleased since it was true I slowly woke, still thinking it’d happened, consciousness returned slowly 2:29 AM I was awake and there’s no little mystic baby – naturally appeared, just disappeared …”

People were strolling back and forth behind the glass, like on a busy sidewalk. It hit me that they were all people who had died in my room.

sium supplements, Tibetan medical powders, blood sugar test strips, alcohol pads, reading glasses, and bifocals in the course of a morning. Noon finds him looking out on passers-by, aware that time is passing him by as well: “while noon bells ring, clock ticking on the kitchen wall above the toilet cabinet – pull chain, worked this morning, flushed a wobbly porcelain throne …”

That’s how it ends, more or less the same, for each of us. Not such a pretty picture. And, looking back at the last moment, it all seems like a flash, a drama that is over in an instant – appeared, just disappeared.’