Many critics have called “Avatar” ” ‘Dances with Wolves’ in Space,” but as a story the film is worse than that: “Avatar” is about as predictable as an ABC After school Special.

When humans arrive on planet Pandora, local residents unite to protect their land from being destroyed by wealthy military-corporate industrialists looking for mineral deposits. The obligatory peace-loving anthropologist (Sigourney Weaver) tries to protect the natives while the renegade military hot- shot (Sam Worthington) changes camps to join them. You can guess the rest of the story without shelling out ten bucks for a ticket ($15 if you choose the 3-D version) or spending a whopping three hours in the movie theater.

So why did “Avatar” gross over a billion dollars in box office receipts in its first two weekends? Despite the predictable storyline, the film is pretty spectacular. Computer generated imagery (CGI) technology has improved to the point where watching this film is as magical as watching Disney’s first full-length animated movies must have been. The line between live action and animation has blurred so seamlessly that you simply forget it isn’t real. Background scenes of the alien planet with its light-infused flora and colorful fauna are breathtakingly gorgeous, works of art worthy of their own exhibition at the Metropolitan Museum of Art (and likely to be displayed there one day in a retrospective of CGI).

A n avatar is a computer-operated, biologically correct robotic suit that allows a human to walk around in the body of a Na’vi, the indigenous life form found on Pandora. Like the characters in last year’s “Surrogates,” humans are hooked up to an EEG that allows them to control these alien bodies while they sleep. The devices have been developed at great expense to help the invading humans ingratiate themselves with the local tribes and obtain what they came for – “unobtainium,” the cartoonishly named mineral that sells for $20 million a kilo back on earth.

Jake Sully (Worthington) is an avatar whose job is to find out what the locals want and then persuade them to trade their home for it. (Did I mention that the mother lode of “unobtainium” is located directly beneath the Na’vis’ Hometree? It wouldn’t be much of an Afterschool Special if it were located anywhere else.) As he lives among the Na’vi and learns their ways, he becomes more and more a part of them. After a while, he says, “Everything is backwards now, like out there is the true world and in here [the human camp] is the dream.”

One disturbing aspect of the film is the mythical choosing of the “banshee,” a Pegasus-like bird that provides transportation for the Na’vi. In Celtic folk- lore, a banshee is a female spirit whose wailing foretells impending death. In “Avatar,” the banshee, we are told, mates for life – not with other banshees, but with the Na’vi who becomes its rider. As Jake performs the rituals that will allow him to achieve Na’vi “manhood” and become a member of the tribe, he must choose a banshee – or rather, allow a banshee to choose him. “How will I choose the right one?” he asks Neytiri (Zoe Saldana), the woman who has been his guide. “The banshee will choose you,” she replies. “But how will I know?” he asks again. “She will try to kill you.”

Sure enough, one of the banshees hisses menacingly at Jake, and he hisses back. He jumps on her neck and she tries to knock him off. Battling fiercely, he eventually subdues her by jabbing his penis-shaped braid into her vulva- shaped appendage, and after a startled snort and enlarging of her eyes she calms down.

“Quick!” Neytiri urges him. “The first flight must happen immediately for the bond to be complete!” And off they go, Jake upon the wailing banshee’s back shouting, “Shut up and fly straight!” Eventually they establish a beautifully harmonious relationship, with the banshee doing all the work and the avatar having all the fun. Although I think the marriage metaphor might have been unintentional, it’s one of the most troubling demonstrations of marriage that I have seen since the 1950s, when men gave their women a good slap to calm them down or kissed them stridently until their pounding fists melted into submission. Ugh.

So, what makes this very simple, predictable (and long!) film resonate with viewers to the tune of a billion dollars and counting? I think it is the myth- ical quality of both the art work and the many literary allusions. We seem naturally drawn to battles between good and evil, nature and science, war and peace. The film alludes to many biblical and mythical stories besides the banshee – to name a few, Pegasus, David and Goliath, Trees of Life and Trees of Knowledge, a chosen Savior, rebirth, and the Garden of Eden.

In one striking scene, Jake and Neytiri choose each other as lifelong mates, after having spent several weeks together. They awake from their off- screen lovemaking in a Botticelli-like Garden, entwined in each other’s arms and covered in vines. This Eden ends abruptly, however, with the sound of tractors and backhoes ripping up the foliage to make way for the engineers. Their mating leads to the end of Eden and the beginning of Armageddon.

To the filmmakers’ credit, they do acknowledge the superiority of persuasion over force; the invading corporate bigwig (Giovanni Ribisi) tries to use diplomacy and trade before unleashing the military. But what happens when, as Jake discovers, “There isn’t anything we have that they want”? Does the invading company just say “Thanks anyway” and go back home? Or do they resort to force? You haven’t seen many movies (or read many history books) if you don’t know the answer. 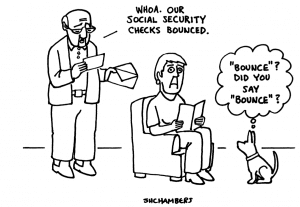