Joe Overton was a well respected young leader at a Michigan-based thinktank. Tragically, he died in 2003 in an ultralight aircraft accident at the age of 43, but one of his enduring intellectual contributions was the development of a communications methodology to explain the role of free-market thinktanks.

Overton devised a simple scale to measure the level of freedom created or allowed by any particular public policy. In educational policy, for example, the least amount of freedom is represented by government-run schools with no parental choice, whereas the maximum freedom would be achieved if there was absolutely no government interference in the curriculum, teaching methods, or management of a school system.

For any policy issue, Overton observed that there is only a narrow “window of political possibilities” — everything else is literally outside a politician’s view. The role of thinktanks

is to produce credible research on policy issues that are outside the window, with the goal of moving the window up the scale of freedom. After Joe’s death, the window became widely known as the “Overton Window,” and it was noted that the concept could be applied across many platforms to explain shifts in public attitudes.

Because libertarians and our policy proposals are often regarded as outside the window, the concept should be of interest to us. My own curiosity was piqued by the appearance of a work of fiction entitled “The Overton Window,” which claims that its protagonist must save both the woman he loves and “the individual freedoms he once took for granted.” So far, what’s not to like here?

In this case, however, the author is much more famous than the concept — although I must confess that before reading this book I had never read, seen, or heard anything by him. It’s not that I live under a rock; I just rarely watch Fox News or listen to talk radio, and I rarely read books by personalities who inhabit either of those airwaves. I therefore approached the book with no preconceived notions about its writer — only a great deal of historical background about the book’s title. Call it my fair and balanced approach.

The protagonist is Noah Gardner, the son of a wealthy and powerful busi- ness owner. Noah works for his father at a giant public relations firm in New York. At the onset, Noah meets the strikingly beautiful Molly Ross in his firm’s breakroom and is intrigued by her appearance, her attitude, and the bill she is posting on the breakroom wall inviting one and all to attend a radical libertarian event happening that evening.

Again, a matter of some interest to libertarians — despite the fact that Beck’s prose reminded me of a bad junior high school creative writing assignment. The overuse of descriptors (“a lush abundance of dark auburn hair pulled back in a loose French twist”) coupled with nonsensical emotive phrases (“though he’d been in her presence for less than a minute, her soul had locked itself onto his senses”) almost caused an immediate return to the bookshelf.

Still, the first few chapters were short and, frankly, I wanted to find out more about the radical libertarian event, so I soldiered on. Beck turned out to be spot-on in describing an event that could easily be a transcript from any number of Tea Party rallies featuring fiery speeches given by rabble-rousing patriots.

When Noah Gardner cleverly pointed out that the room was filled with a bunch of fringe fanatics, I was immediately transported back in time to my first Libertarian Party convention. One speaker expounded the ideas of “Jews for the Preservation of Firearm Ownership.” The doors were open and passersby would stop to listen, but not enter the room. Each time that would happen, the speaker would say “militia” into the microphone, which usually caused the passerby to flee. Another speaker, Irwin Schiff, passionately made his case for why citizens are not obligated to pay federal income taxes. For pushing this case, Schiff is, of course, now residing in the Terre Haute Federal Correctional Institution at the tender age of 82. Finally, Bill Baird

spoke on birth control and asked us all to join him in an attempt to get arrested by protesting in the streets. Protesting what? Nothing in particular, but Baird did mention that he needed a place to stay that night and he, too, considered prison a viable option. The room was filled with characters who would have been most at home in a comic book store. It was the best convention I ever attended.

But to return to Beck’s book. We hear two speeches from characters who will play important roles in the story. One, Molly’s mother, leads a (fictional) group called Founders’ Keepers. The second runs an internet website called “Overthrow,” which (guess what?) promotes radical change. We learn that he is Molly’s former lover. Needless to say, he and Noah do not hit it off.

Given Noah’s public relations acumen, it appeared that the story might be going in a useful direction. It would show libertarians how to craft messages that would be more likely to achieve public approval, moving the Overton Window so as to make libertarianism a politically acceptable choice.

And that’s the biggest problem with the book: its cover claims it as “A

Thriller,” but it’s not a thrilling book. Not only are the characters shallow, but there aren’t many plot twists, and the action is minimal. The story is tightly wound; there are not a lot of superfluous characters. And while both Molly’s mother and Molly’s former lover play key roles, they meet with predictable endings.

There are some redeeming qualities that may be of interest to Liberty readers. Throughout the book, Beck intersperses facts that are meant to remind people of real world events that might foreshadow a new, but not better, global order. He even devotes an Afterword to providing sources and links for further reading. And his general approach is sympathetic to individual freedom; its protagonists are the heroes of his tale.

I liked Beck’s nods to some of my own favorite stories. For instance, Founders’ Keepers are a direct take-off from Ray Bradbury’s “Fahrenheit 451,” in which the protagonist joins a group whose members have committed themselves to memorizing the classics in order to preserve them in an era in which books are being burned. In Beck’s novel, the members each memorize a classic pamphlet, tract, or book from the American revolutionary period — in short, someone memorizes Thomas Paine, someone memorizes Thomas Jefferson, someone memorizes James Madison, etc., in case the powers that be destroy all current literature, and society must be started anew. Also, the movie “Ocean’s Twelve” figures rather prominently in one of the storylines. 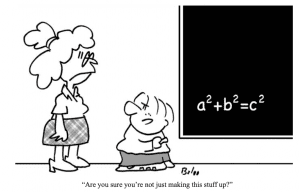 But such occasional evidence of intelligence simply emphasizes, by contrast, Beck’s lack of creativity and writing acumen. His inattention to detail refuses to allow the reader to suspend disbelief. For example, the story mentions an upcoming presidential election, but it appears to be set in 2010. And Beck’s partisanship is annoying. His characters emphasize the idea that both major parties are unfriendly to individ- ual freedom, but the Republicans get a free pass in this story, whereas popular Democrats become easy targets. Bill Clinton is identified as a past client of Gardner’s public relations firm. Hillary and Bill are given some good-natured ribbing, but Bill is described as particularly ruthless when faced with political opposition. Eliot Spitzer makes a cameo in predictable fashion, and the plot centers on a fictional attack on the federal building in the district of Harry Reid. It would seem that if any author wanted to create a plot featuring a new world order developed by a wealthy and powerful elite, the Bush clan would figure prominently; yet they are never alluded to or mentioned by name.

Conspiracy stories have been told many times before, and this book will remind some readers of a poorly written “X-Files” episode. Indeed, conspiracy theorists will probably be disappointed because the book covers no new ground for them. Libertarians will be disappointed because the book provides no insights, after all, about how they might move toward more public acceptance. And people who don’t like Glenn Beck aren’t going to read the book anyway.