The year was 1898. Uncle Sam wanted to fight a musical comedy war with Spain. Safe and short. A nobody-gets-hurt war. But in those years credit was not yet enthroned. You couldn’t put the Army payroll on a credit card. So, first you got the money – then you fought the war.

Just like today, the government looked for pockets to pick. Ah – that newfangled instrument that jangled your nerves at suppertime – the telephone. Everyone who had one ought to pay a flat 3% tax, to cover the costs of the war. And so, the government legislated.

One hundred and eight years passed. The Spanish- American War now gathers dust in the annals of history; only one American in a hundred remembers the Maine. But we still pay the tax.

Now, after all those years, big outfits like Office Max and

Honeywell International are fighting the phone tax in court. And they’ve won some preliminary cases. The Congressional Budget Office worries that by 2007, the IRS· will lose the tax revenue on toll long distance calls.

Until then, check your phone bill and note that 108-year-old 3% fee. Then go look up the Spanish- American War on the Internet. M a y a s well know what you’re paying for. 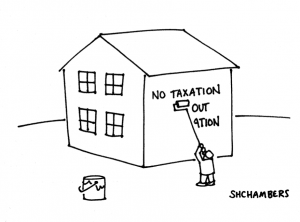 Ted Roberts' humor appears in newspapers around the US and is heard on NPR.
View all posts by Ted Roberts