War has united America, for the moment. But under the surface, thoughts are dissimilar. One of the keys to what we think is how we answer the question, “Why do they hate us?”

President Bush had an answer in his speech to Congress Sept. 20: “They hate what we see right here in this chamber – a democratically elected government. Their leaders are self-appointed. They hate our freedoms – our freedom of religion, our freedom of speech, our freedom to vote and assemble and disagree with each other.” They hate us for who we are.

The other answer is that they “hate us because of what our government has done. Osama bin Laden has said the three most hateful things America has done is to support Israel’s hegemony over Palestine, to embargo Iraq, and to put military bases in the holy land of Saudi Arabia.

Consider what these answers imply. If people hate us because of what our government has done, we have to examine what that was. Something may need to be changed. If they hate us because we vote, because our women drive cars, or because we don’t pray five times a day, we need to think no more. If they want to kill us for that, it’s time for a war.

Bush’s war has divided the right, and this disagreement is fundamental to that. For the pro-war side, consider Cathy Young in Reason: “There is every reason to believe that our current enemies, fundamentalist Islamic militants, are motivated by far more than U.S. support for Israel, the plight of the Palestinians, economic sanctions against Iraq, and the presence of U.S. troops on the Arabian peninsula, the main canards of the finger-pointers. In fact, what makes America the Great Satan in their eyes is precisely what libertarians cherish – ‘our secular culture of freedom, reason, and the pursuit of happiness,’ as philosopher David Kelley put it.”

Patrick Buchanan summed up the view of the “finger pointers” on KVI-AM radio, Seattle, in November: “These acts of cataclysmic terror are a direct result of us playing Roman Empire all over the world.” 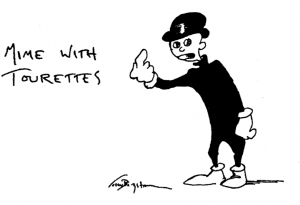 I agree with Buchanan. For me, the key to the question is not to examine the terrorists – I haven’t had a chance to examine any – but to listen to ordinary Middle Easterners. It may be that a handful of terrorists hate everything about America, from its foreign policy to what it drinks at lunch; it may be·that one cannot be a mass killer unless one’s bile runs pure. But what of the population from which the terrorists recruit?

And that answer is easy. There is a widespread anger. Anybody from Egypt, Yemen, Saudi Arabia, or Pakistan can tell you about it. And what they say is, We don’t dislike Americans, but we don’t like what your government has done to people like us. These are not terrorists with 100- proof hatreds. Their complaints are political. They may have some cultural complaints about America – so do many foreigners – but what angers them is our political acts that affect them.

But it is not plausible to assume that the ordinary, anti- American Middle Easterner is deeply and personally interested in who we are. We are not interested in who he is. Is it not more reasonable to assume that he is interested mostly in himself, and people like him? If that is so, it surely must frustrate him when the Americans, possessing so much power and so little sense, brush off his complaints by saying he hates American freedom.

The millions who resent the United States, and the distilled few who hate Americans with criminal intent, have feelings about us that began with what our government .did. To admit that is not to forgive the terrorists for willing the deaths of innocents. It is not to give up on capturing Bin Laden. It is to recognize that events are complicated, that blame comes in different strengths and sticks in more than one place. Anyway, blame is not the only thing to think on. There is the practical question of safety, and we are not making ourselves safer by kidding ourselves about the motives of people who oppose us.