Ayn Rand (1905-1982) was her generation’s largest influence on libertarian thought. She was also a powerful novelist and a king-sized American personality. During this, Rand’s centennial year, many of her friends and acquaintances have been communicating their memories of her. I think it’s especially fitting that Erika Holzer, herself a novelist (“Double Crossing,” 1983, and “Eye for an Eye,” 1994), has contributed a memoir of Rand as a writing teacher. To tell the truth, I am on record as one of the many people who urged Holzer to do it.

It is very rare for an author to write at length about her literary methods, and rarer still for an author to write at length about what she learned from a contemporary. Someone once pointed out that writers tend to rebel against their “parents,” while revering their “grandparents.” Thus, modernist writers scorned the Victorians and did their best to resurrect the poets of the Enlightenment and the baroque period. The Victorians were still around when the modernists were growing up, and they were tired of listening to those overbearing parents; but writers from earlier generations posed no competitive threat. They could be used as examples for almost any precept.

As for writers’ explaining· their methods, forget it. Most prefer not to dispel the authorial mystique. Some, of course, are simply incapable of explaining what they do. A person who is good at creating plot and evoking character isn’t necessarily any good at writing expository prose. But a perusal of authors’ private correspondence will show you how good they can be at explaining how other authors went wrong, even while disclaiming, in public, any interest in literary analysis. “Let the work speak for itself,” they say, cloaking with a half-truth their refusal to reveal trade secrets.

The half of the idea that’s true is the notion that a work of art can hardly be improved by someone’s explanation of how it was created. Either Monticello is a successful adaptation of Roman monumental architecture to American domestic use, or it isn’t. No dissertation about what Jefferson thought he was doing when he decided to make a three-story plantation house look like a one-story temple will change the aesthetic effect of his decision.

The half of the “let-the-work-speak-for-itself” idea that isn’t true is the implication that there’s nothing to be learned by studying how an art object is created. That’s just silly. If you follow “America the Beautiful” through its various revisions, you will see how much better it is to conclude the “Pilgrims” stanza in this way – America, America!

God mend thine every flaw. Confirm thy soul in self-control, Thy liberty in law than in this way –

America, America! God shed his grace on thee, Till paths be wrought through wilds of thought

By pilgrim foot and knee.

Studying the revisions, you may also see the reason why version A is superior to version B. A literary image needs to be visualizable. It’s a lot easier to imagine the Deity mending flaws and confirming souls than it is to imagine feet and knees working their way through thickets of thoughts. Even when one accepts “knee” as a probable symbol for prayer, it’s still hard to see what’s going on with these symbols. The verbal bolts don’t fit the verbal nuts.

The job of a literary craftsman is to find problems like this, and fix them.

That’s what Holzer lets you do, and that’s what Rand let her do. Rand was an eccentric writer in many ways, but she was always a very thoughtful one. She could account for every word she used, and explain with great lucidity why she wanted to use it. When she went wrong, she went wrong for a reason. I like the epigraph that Holzer takes from Sophocles: “The reasonable thing is to learn from those who can teach.” It mirrors the common sense that lies – often unnoticed by readers and followers – at the basis of most of Rand’s literary ideas and practices.

Always a lively writer, Rand was also an exceedingly lively advice giver. Taking a look at Holzer’s fledgling fiction, Rand saw a reference to faces “explod[ing] in panic.” Well,what would you say about that? Many people would sense that there was something wrong but not be able to explain what it was. Perhaps they would make a vague reference to “melodrama” or tell the aspiring writer to “tone it down a little.” Rand took a more instructive approach: “Make your metaphors real, Erika….A good way to put your metaphors to the test is to try them out in front of a mirror.” Holzer took her mentor’s advice, went to a mirror, and made her face look like it was”exploding.” Then she “exploded in laughter” (27). Now, that’s good teaching.

Holzer came from a family of lawyers, and became one herself. A story provocatively entitled “The Secret 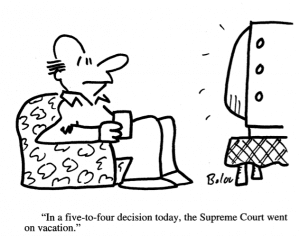 Room,” written at the age of 12, did not seem to presage a literary career. But an interest in Rand’s ideas led to an invitation to meet with her, and

Rand could account for every word she used, and explain with great lucidity why she wanted to use it. When she went wrong, she went wrong for a reason.

Holzer took along the tell-tale evidence of her interest in a new career – her early, practice works in fiction writing. Rand at the time was an enormous best-seller and the demanding leader of an intellectual coterie. One would have expected her to turn Holzer away with some remark about coming back when you’ve finished a book. Instead, she took the time to teach her.

Much of her advice was about the psychological processes that are most closely related to writing. She didn’t make vague remarks about authors’ “inspiration”; she gave specific insights into processes that people can actually control. You’ve been told that you should “write what you know.” You should write stories about your profession, for example. Well, that might result in a lot of accurate surface detail, she said, but there’s something more important than surface detail.

Why don’t you stop worrying about what you “know” and identify. what makes your “blood boil” (31)? Discover and exploit your real motivation.

Rand showed the same common sense in commenting on the famous “writer’s block,” from which, as we know, she herself sometimes suffered severely. She didn’t call for 20 sessions with a psychiatrist, or for a voyage to Tahiti. “More than likely,” she said, you can’t write because “you don’t know all you need to know about a given character or a piece of the action” (72). Find out more – but “don’t overdo it. It’s a common mistake by the neophyte … to read everything ever written on whatever relates to his subject” (77). What she advocated wasn’t “research” but imaginative meditations on the meanings, motivations, settings, and implications of one’s plot and characters. Writers’ problems can be fixed by writers’ work – not by a research library, a psychiatrist’s couch, or a moralist’s lectures.

It’s a remarkable fact that the modern libertarian movement was largely initiated by creative writers, literary critics, and essayists, by such people as Isabel Paterson, Rose Wilder Lane, John Chamberlain, Albert Jay Nock, and Rand herself. If you told any of those people that literature is interesting principally because of its “ideas,” particularly its “political ideas,” .you would soon be having a very bad day. The best word you’d hear would be “philistine.” But that’s exactly what a lot of libertarians are. They are people whose moral concern with political ideas reduces their literary responses to merely political ones. That’s why they read so little real literature. Conrad? Yeats? Eliot (either of the two)? Not interested. But the latest work of pUlp fiction, with some libertarian ideas thrown in? Hey, this is a classic!

Rand – often unfairly accused of writing propaganda novels – shuddered at the thought that any of her ideological friends would write such stuff. Propaganda fiction, she said, was “all facade and no structure,” by which she meant, no aesthetic structure, nothing to which one can respond on a deeper level than, “I agree with this” (39-40). Holzer, taking up Rand’s theme, sensibly suggests that aspiring writers ask themselves, “Am I really impassioned about my story or am I just hung up on spreading the Word and enlightening the masses” (40). That’s good advice. Rand went even farther. Referring to her own philosophy, Objectivism, she told her followers, “Don’t censor yourself by Objectivist morality” (40). Her advice was seldom heeded, though it deserved to be.

But Holzer got the point. She got it so well that she became a fine Randian teacher herself, as this book shows. It’s all summed up in one of her comments: “I have always believed that writers are made, not born. That fiction writing, in particular, starts out as a craft. That if you work at it hard enough and long enough, you can turn it into an art” (51).

Holzer isn’t saying that anybody can be a good novelist. She is drawing attention to an idea that goes back to Aristotle’s theories, and beyond them, to Homer’s Odyssey: the idea that art is craftsmanship, or it is nothing. Her book shows the joy that both she and Rand found in thinking through the problems of craft – a rare pleasure,

Referring to her own philosophy, Objectivism, she told her followers, “Don’t censor your- self by Objectivist morality.” Her advice was seldom heeded, though it deserved to be.

both in regard to its intensity and in regard to most people’s ignorance of the fact that it can ever be a pleasure at all. The good thing is that you don’t need to be a writer to feel that pleasure. All you need is some aesthetic and intellectual curiosity.

Holzer rounds out her book with text and discussion of two fine short stories of her own, “Eyewitness,” first published in this journal in 1988, and “The House on Hester Street.” The latter story, which illustrates the transformation of real situations into imaginative art, enables Holzer, explaining how it came to be, to evoke a salient picture of her mother, whose life “may have been conventionally small-town, but who played the role of co-conspirator to her daughter’s romantic notion that life was – could always be – a grand adventure” (235). Holzer’s book shows that an appreciation for artistic craft can be a tremendously important part of that adventure.