On Sept. 5, 2006, a milestone in history was reached: a TV network allowed a brave, trailblazing woman to present the evening news all by herself. And if you think that sounds patronizing, google for some of the gush over Katie Couric’s debut as CBS news anchor.

Using “anchor” for the lead newsreader, of course, implies that the nightly news is a voyage, traveling
with reporters to all corners of the globe, and then returning to the harbor of the main news desk. The role requires enough intelligence to pretend you can find Chechnya on a map and a voice that doesn’t sound like Care Bears mating, and to this point Couric has demonstrated neither.

With her recent refusal to travel to Lebanon, she has also demonstrated an unwillingness to relocate with the main desk when certain events, such as an impending war or gathering storm, warrant. I can only guess that CBS execs, having never seen an anchor outside the context of museum decor, have assumed that, like a paperweight, it’s merely a heavy lump that holds things down.

I didn’t think it possible, but Couric made me long for the days of Dan Rather and Connie Chung. At least they could deliver the network’s simplistic, skewed takes on the day’s events with an air of dignity – and faced with the instant-response reportage on the internet, and the endless analysis of minutiae on cable TV, dignity is really all that network news has to offer.

The American people are almost always willing to give novelties a hearing. The first week of ratings, dropping from 91. to 4.9, suggest Couric has had hers – and she was promptly tuned out. 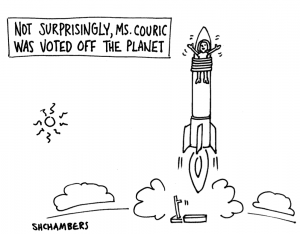