Like any other system of human relationships, capitalism is imperfect. Its flaws stem from human nature (“bad apples”) and from people trying, often by trial and error, to pursue some- times conflicting goals. So we come across the principal/ agent problem – say, the cashier who treats us rudely because the store owner is not there to monitor her. Time lags trip us up, too. The insurance industry takes time to restore predictable prices in the wake of Sept. 11; with technology changing rapidly, all of us struggle with incompatible 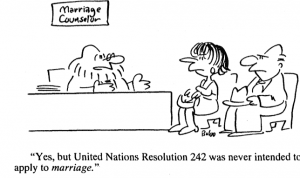 computer systems; and many feel restaurants are too slow to offer non-smoking sections.

There’s the simple problem of differences in taste. Sleazy ads on radio talk shows annoy me (but then the shows are “free”), while other people hate the tacky kitsch of towns that spring up outside national parks, catering to tourists. Finally, government intervention launches new problems that many people ignorantly blame on capitalism.

I’ve had other complaints. For example, I was shocked by day-labor companies in Boston that picked up skid-row workers each morning, returned them in the evening, pay- ing them wages that were then used to buy alcohol. Today, I recognize that this exchange offered each side about the best it could get, given what it was looking for and willing to buy.

Government programs replaced such exchanges and in doing so created welfare recipients and street beggars.

All that said, I do have a gripe. Why are there such low minimum payments on credit cards? By requiring people to pay a minuscule portion of their debt, companies deliberately tempt people to overextend themselves and build up heavy interest payments. This policy (from top management – it’s not a principal/agent problem) seems outside the spirit of Adam Smith’s view that self-interest leads to general benefits. An echo of ·that example is found in my ATM machine: when I enter a deposit in my checking account, my receipt tells me not just what my new total is but how much I have available to spend – at high-interest rates. But when I put money in my savings account, which has no “check- ing-plUS” feature, I am told that I do not have access to all my money – they want to make sure I can cover it all.

Well, that’s it. To me, that’s what is wrong with capitalism. Yes, it’s a short list.