Contrary to what you hear from just about every politician and every pundit, the Enron collapse suggests that less regulation might make future disasters of this type less likely.

Enron, like most companies, sought to minimize liabilities on its balance sheet by transferring debts and risks to external parties. As most readers of business pages know by now, the entities to which Enron transferred many of its liabilities were creatures of Enron itself. Shifting risks to such entities is merely internal bookkeeping and has no net benefit. Shell games like this come close (or perhaps exceed) the threshold for fraud and the courts will be deciding whether stupidity or criminality is the more plausible explanation. But fraud isn’t new and laws against that problem have long existed. No new regulations are needed here.

But other regulations may have deadened the market’s ability to detect Enron’s problems earlier, when they were less severe and when corrections would have been less costly. After all, some people knew much of the Enron story much earlier, indeed, at a time when Enron’s share price was rising sharply. But markets are efficient and knowledge that a company is in trouble inevitably results in people selling the stock, driving down its price. What made it possible for Enron stock to soar to the $90 range while it was getting into worse and worse shape?

Certainly the laws against insider trading are part of the reason this happened. After all, the rationale for such laws is that no one should be allowed to profit from information garnered because of one’s special position within the firm. It wouldn’t be fair! Outsiders can gain from acquiring knowledge but insiders, whom we would expect to know more, can’t.

Had Enron insiders been able to sell based on their realization that the firm was in trouble, Enron’s share prices would never have soared so high and fewer investors would have rushed to purchase the stock. And, of course, the investors would have experienced lower paper losses when the share prices did drop. Instead, the share price increased rapidly throughout 2000 – creating the bubble. The Enron employees who thought they were rich soon found they weren’t, and lots of other people lost money.

As Hayek and the Austrian economists spent their lives .explaining, markets are best viewed as institutions that communicate information about the value of goods and services. If there is no ability to exchange goods, then that knowledge can- not exist. Under current law, outside investors can invest (or disinvest) in a firm based on their knowledge about it. But those in 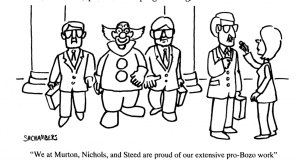 the best position to learn critical information about a firm face major barriers to using and profiting from such information. Not surprisingly, many insiders – managers, employees, auditors, and investment analysts – find it less worthwhile to dig deep to find the real status of the firm. The executives’ positions depend upon the firm’s success. If they are unable to profit from bad news, they will tend to hide it, hoping they can turn the situation around.

The result of insider trading laws is that less energy is put into assessing the viability of firms. And, thus, stock values are always somewhat distorted. In most cases, those distortions are minor. In the Enron case, they were massive – and that fact turned a problem into a disaster.