Even cliches die. At least some of them do. And (to cite a cliche that’s been around since Homer) it’s interesting to see which ones bite the dust. Unless I miss my guess, however, there’s some bad news coming from Clicheville. Among the cliches that seem to be buying the farm (that one’s pretty recent, and I have no idea where it came from: do you?) are expressions that reflect an understanding of individual preference and market exchange, while cliches that represent human behavior in simpler, less economically cogent ways appear to be doing pretty well.

In my extreme youth, the expression “each to his own” or “to each his own” was heard very frequently – so frequently that you sometimes wanted to scream when you heard it. The thing descended from longer, ickier expressions, such as the cliched witticism of the 18th century, “Each to his own taste, as the man said when he kissed the cow.” It could appear in startlingly illogical contexts, such as the ineffably silly theme song of the ’50s’ situation comedy I Married Joan: “To each his own! / Can’t deny / That’s why I / Married Joan!” Nevertheless, it conveyed a truth. Preferences are fully individual and not to be quarreled with, even when someone’s preference is for a cow named Joan.

One almost never hears that expression now. The cliche (if you want to dignify it with that august title) that currently greets any evidence of eccentric choice and preference is “Whatever!”, which, when translated, means, “I see that you’re an individual – so what? I don’t give a damn. Get away from me.” Not exactly an affirmation of individualism.

Here is another cliche one rarely hears anymore: “You pays your money, and you takes your choice” – as accu- rate a representation of individualist and free market principles as I can think of. What one does hear, ad nauseam, is a cliched approval of people who “pay their’dues.” Former Vice President Mondale, we were told in November, deserved nomination and election to the Senate because “he paid his dues”; he’d spent a lifetime sacrificing his intellect, if any, to the needs of the Democratic Party. But notice what’s going on in the “dues-paying” cliche. It represents life, not as a process of free exchange – choosing, paying, and receiving the article you rightly or wrongly chose – but as a process of submitting to the rules of club membership.

People pay whatever they’re told to pay, and that makes them good. Well, good enough, maybe. Eventually, they may get something back.

I’m sorry, folks. I’d rather hang out with the illiterates that pays their money and takes their choice than stand in line for favors with the former VP.

Of course, there are some very bad choosers in the marketplace of life. How shall we portray these people? One way is to remark that “there’s one born every minute” –

which means that we’ll never run out of suckers. And you don’t even have to include the word “sucker”; everybody gets the point. Or did get the point. The young adults whom I meet have never heard that “there’s one born every minute,” and they almost never understand the phrase.

They do understand a certain old cliche whose use has increased steadily over the past 30 years, until it is now virtually omnipresent: the cliche about the guy who bought the Brooklyn Bridge. Note the difference between the two cliches. The “Brooklyn Bridge” cliche focuses on one person

Former Vice President Mondale, we were told in November, deserved nomination and election to the Senate because “he paid his dues”; he’d spent a lifetime sacrificing his intellect, if any, to the needs of the Democratic Party.

who does a stupid thing, and the stupid thing is his attempt to purchase a structure that is publicly owned and therefore not for sale. “There’s one born every minute” presents no such bias against privatization, and no implication that stupidity is rare among the populace. It suggests that stupidity is everywhere, in both public and private life; it suggests that even you might be stupid. The only person immune from the implied critique is the speaker, because he is the one who knows how stupid other people are, and rejoices in – indeed banks on – the fact, perceiving its potential benefits to his revenue stream. The “Brooklyn Bridge” cliche is democratic, conformist, deadening. “There’s one born every minute” is meritocratic, individualist, joyous, enlivening. That is why, I suppose, you seldom hear it. 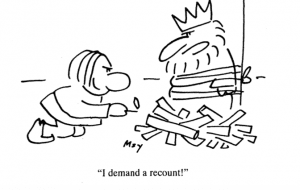 One last example. For many years, I’ve been using an old and formerly very common response to differences of opinion and the conflicts they incite. “That’s what makes horse races,” I say, and it usually ends the argument. Now, however, the expression has that effect only because everything has to stop while it’s being explained. No one understands it the first time around. And this is not an expression, mind you, like “have your cake and eat it too,” which was born with a severe verbal handicap. “Have your cake and eat it too” is not amusing; it’s just a strange little puzzle: what the hell does “have” mean in this context? Who “has” a cake? “That’s what makes horse races” is different. There’s no puzzle about the words; instead, there is a chain of easy reasonings, ending in a mild flash of fun. You disagree with someone; there’s a difference of individual judgments, the significance of which you summarize by observing that such differences are “what makes,” what is necessary to, “horse races.” Your opponent then has the opportunity to think, “How is that true? Oh, I see! There wouldn’t be any horse races if nobody bet on them; and nobody would bet on them if everybody agreed on the likely outcome. Differences of individual judgment are therefore necessary to horse races, and by extension, to every other kind of fun.” At this point, your opponent, beaming with satisfaction at his own intelligence, becomes your friend.

It’s a great cliche, but I’m afraid that most people are no longer up to figuring it out. I leave you to guess why this should be true. Here are the possibilities. Put a check next to any explanation you agree with.

A. People are losing their appreciation for individual differences.

B. People are losing their ability to get through more than one step of a logical process.