The Lobster House, started in 1936 in Cape May, is the largest independent (non-chain) restaurant in New Jerse)T, the 18th largest independent in the United States. Equipped with its own fleet of boats, the restaurant ships millions of pounds a year of fresh seafood, including tuna, shark, and oysters, throughout the United States. The harbor in Cape May is home to an annual shark- fishing contest, pulling fishermen from around the world to compete for a $228,000 purse for the biggest makos and threshers, plus a $50,000 Monster Prize for the heaviest shark.

As a sign of the times, Mexican immigrants seemed to be the majority labor force on the Lobster House’s fishing boats 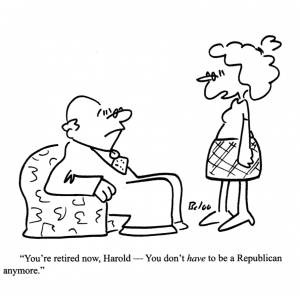 this year, just as they’re becoming a major factor in South Jersey agriculture, landscaping, and construction. Our waitress explained that though the Mexicans are hurting summer jobs for Cape May’s kids, they’re more reliable than the town’s own high school and college summer workforce. As another sign of the times, the waitress said that last year she averaged $200 in tips for her three-hour lunch shift, but this year it was down to $100.

Up the beach in Sea Isle, the largest realtor in town said this year’s rentals weren’t keeping up with the supply of houses. At Trump’s Marina in Atlantic City, there’s seating for probably 200 at the outside bar and dock, but at 1 p.m. during peak season on a sunny Friday our table of five was the only occupied table or bar stool in the place. Our waitress said she averaged $200 at lunch last year, but her tips this year had dropped to $40. The bartender for what should have been a lunch rush explained that he’s worked at Trump’s for 11 years and this was the worst. “We’ve never seen it like this. Inside too, at night in the restaurants, there’s nothing.”

Yachts and small boats were sitting silent in the harbor, whereas last year the big story was a megayacht that got a fill-up for $54,000 before heading to Europe. This year, the same fill-up would be closer to $80,000.

Most attribute the lackluster summer season to the price of gas. “Workers are feeling the gasoline pinch and are adjusting their leisure activities to compensate,” writes J.W. Elphinstone of the Associated Press, referring to a recent consumer survey. “Almost 65 percent of respondents are reducing their entertainment and hobby expenditures because of higher fuel costs. More than half are cutting back on summer travel, while 29 percent are canceling summer travel plans altogether.”

If that’s the economic downside at $3 per gallon, one wonders what the effect on the U.S. economy would be at $5 or $10 per gallon. In Germany, the price in U.S. dollars of gasoline at the end of July was $6.56 per gallon, and that’s without the lid blowing off the Middle East. In Belgium, the price was $6.76.

A month after the attacks of September 11, Harvard economics professor Martin Feldstein, chairman of the Council of Economic Advisers from 1982 through 1984 and President Ronald Reagan’s chief economic adviser, issued a warning about the direct links between America’s oil dependency, anti- Americanism throughout the Middle East, and national security. “Saudi Arabia, Kuwait, Iraq and the United Arab Emirates have more than half the world’s reserves of oil,” he wrote, “while the United States has only 2 percent of the total.” The National Energy Development Group estimates that by 2020 the Gulf area will be producing two-thirds of the world’s oil. U.S. dependence on imported oil was at 42% of consumption in 1974. By 2000, imports had increased to 52% of total U.S. oil consumption.

Feldstein saw no reversal in the trend, even with fewer government restrictions on drilling and rising oil prices effecting an increase in domestic production: “Experts now predict that the oil imports of the U.S. will rise to 70 percent of our consumption by 2020.”

Increases on the supply side won’t fix the problem, he argued. What’s required are decreases in demand. It takes 40% more oil to produce $100,000 in income or output in the U.S. than in France or Germany.

The fix isn’t so hard. For starters, the Toyota Prius Liftback gets 51 mpg on the highwa~ 60 mpg in the city – enough to get the Lobster House waitress back to $200 and keep billions from sloshing around the Middle East and finding its way into the hands of Hezbollah.