The good news out of Munich is that BMW has come up with something that could do a better job than the CIA at defunding al Qaeda. The BMW Hydrogen 7, available next year in a limited series of a few hundred cars in the United States and other countries, runs on either gasoline or liquefied hydrogen. “Running in the hydrogen mode, the BMW Hydrogen 7 essentially emits nothing but odorless vapor,” reports The Auto Channel. “And unlike fossil fuels, hydrogen is available in virtually infinite supply.”

A BMW engineer took off his glasses for the press and held them a few inches from the car’s exhaust pipe. “See, I can even clean my lenses,” he said, wiping the warm steam off with a felt cloth. The aim, says BMW, is to “create a sustainable future for individual mobility independent of fossil fuels” by way of a technology that Udoes not in any way mean giving up the dynamics and performance typical of BMW.” The Hydrogen 7, with a top speed limited electronically to 143 miles per hour, accelerates from 0 to 62 mph in 9.5 seconds. Quicker yet, with a top speed of 185 miles per hour and going 0-60 mph in 6.0 seconds, is BMW’s hydrogen-powered H2R, unveiled two years ago at the Paris Auto Show.

Two days after BMW’s Hydrogen 7 announcement, General Motors said its hydrogen fuel cell-powered cars should be on the roads as early as 2011. “This is to re-establish our technological credentials with the American public and the American media,” said GM Vice Chairman Bob Lutz, speaking at the Camp Pendleton military base as the company delivered a hydrogen concept car that will be test-driven by Marines. In July, Ford began production of a hydrogen engine that will be used in the E-450 shuttle bus in Florida. In Januar~ Ford’s F-250 Super Chief, a concept truck that runs on gasoline, E85 ethanol, or hydrogen, was introduced at the 2006 Detroit Auto Show. In addition to having the potential of boosting U.S. incomes in the corn belt and cutting the flow of dollars to Hamas, the F-250 delivers what Ford calls a supercharged package of “rugged elegance” – a “full-glass roof bisected by a leather-wrapped grid of American walnut,” a pair of “automated ottomans” for rear-seat passengers, a front end designed to look like the American Super Chief locomotive, and an engine that runs 500 miles between fill-ups when operating on hydrogen.

Given the competitive drive within capitalism to be first with the best, it’s a safe bet that the pace of development of the aforementioned technologies will only become more rapid. Equally predictable is the effect on the economies of the Islamic Middle East. ”According to a World Bank estimate, the total exports of the Arab world other than fossil fuels amount to less than those of Finland, a country of five million inhabitants,” writes Bernard Lewis in his book, “What Went Wrong: The Clash Between Islam and Modernity in the Middle East.” “In the course of the twentieth century it became abundantly clear in the Middle East and indeed all over the lands of Is- lam that things had indeed gone badly wrong,” he adds. “The quest for prosperity through development brought, in some countries, impoverished and corrupt economies in recurring need of external aid, in others an unhealthy dependence on a single resource – fossil fuels. And even these were discovered, extracted and put to use by Western ingenuity and industry, and doomed, sooner or later, to be exhausted or superseded.”

Worse than the economic failures in the world of Islam is the political result: “The long quest for freedom has left a string of shabby tyrannies, ranging from traditional autocracies to new-style dictatorships, modern only in their apparatus of repression and indoctrination.” One might say we’ve ended up with two worlds. On the one side, BMW engineers. On the other, suicide bombers. On the one side, scientific advances, reason, and individual liberty. On the other, never-ending grievances and boundless victimhood, a downward spiral of rage, self-righteousness, envy, and self-pity.

As a way out of its malfunction, Lewis recommends that the Muslim world, rather than continuing to blame a series of scapegoats, ask not, “Who did this to us?” but rather, “Where did we go wrong?” 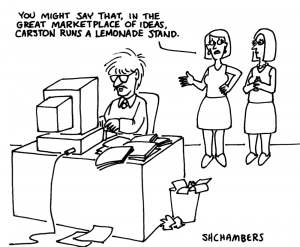