Seattle councilwoman Kshama Sawant, the woman whom the UK Independent has called “America’s most high-profile socialist lawmaker,” has apparently survived a recall effort.

The vote was narrow. As I write, a week after election day, the tally is 50.38% to keep her in office. Some of the ballots are iffy. Seattle votes entirely by mail, and several hundred ballots have signatures missing or not matching the ones on file. Most of the messed-up ballots are apparently from younger voters — Sawant voters, mainly. Some will be “cured” by the voters coming in and signing, and some will have to be tossed. If a high proportion are tossed, Sawant could still lose, but that seems unlikely.

This will be Sawant’s fourth victory. Three of them have been extremely close, with her pulling ahead several days after election day, which here is really the begin-counting-votes day. I have heard no charges of election fraud. It seems that her voters have short attention spans. They vote late and they make mistakes.

Sawant represents the district east and northeast of downtown — the district with the highest population density in the state, with a high proportion of youth, gays, and renters. It is the district that contains the six blocks of the “Capitol Hill Autonomous Zone” that held out against Seattle Police for a month in the early summer of 2020.

Sawant’s voters have short attention spans. They vote late and they make mistakes.

In the recall campaign, the two sides each spent close to a million dollars. That sounds like a lot, but in Seattle a million bucks amounts to one and one-quarter times the price of the median single-family house. I imagine that each side’s house-and-a-quarter of wealth was transformed into a gazillion propaganda postcards. I live in Seattle, and I usually receive stacks of these, but Sawant is not in my district, so I didn’t get any this time.

Officially, the reason to recall Sawant was that she broke the law, the most egregious example being her leadership of a protest march to Mayor Jenny Durkan’s house. Durkan was a federal prosecutor before she was mayor, and by law her address is a protected secret. 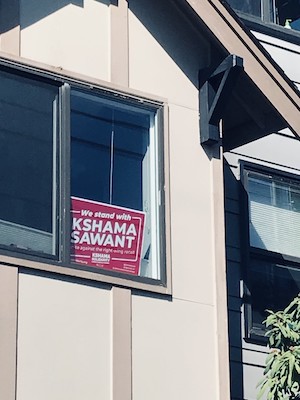 Unofficially, the reason to recall Sawant is that she is a radical leftist. Because this is a libertarian website, and we are classified by the rest of the world as right-wingers, my statement risks being taken as the low-down tactic of gross exaggeration — getting all worked up over the most ridiculous, stupid, or alarming person among your political opponents. The righties on the radio do this all the time, getting in a froth over the most left-wing wackos in Congress. From the left side, CNN does it daily, finding the dumbest Republican on the hill.

Kshama Sawant would no doubt accuse me of “redbaiting,” a term she has taken out of the political dustbin of the 1930s. It’s true enough. I offer in my defense that she is an open member of Socialist Alternative, which is a proudly crimson outfit. Google it and decide for yourself. Here, from the web page of its international affiliate, International Socialist Alternative, is how Sawant describes herself:

“I am a Marxist. That is to say, I am a scientific socialist. That means I do not engage in the wishful thinking or political impressionism that is the stock-and-trade of the liberals. I base myself — as do all my comrades in Socialist Alternative — on material reality, on historical materialism — which is the study of history through a scientific lens. . . . And it is high time that we draw up a balance sheet of the Democratic Party — which is a failed, rotten party through and through.”

My satisfaction has long since worn off. Replacing a Democrat with a Marxist is a bad trade.

Seattle has had radical leftists in office before, though probably not of the same stridency. In 1916 we elected Anna Louise Strong, the daughter of a Seattle pastor, to the school board. At the end of the 1920s she moved to Russia to edit a newspaper under Stalin, and when he kicked her out, she moved to China to be with Mao Zedong and Zhou Enlai. I don’t know if Anna was a Red when she was on the school board, but she was, later. In 1937 Seattle elected a University of Washington English instructor, Hugh De Lacy, to the city council, and in 1944 elected him to Congress as a Democrat. De Lacy was a member of the Communist Party, though secretly. Being a secret Communist was a thing back then. You could be a Red but you could not be up front about it. In 1999, on the runup to the WTO protests, I interviewed a woman in Seattle politics who told me she could call herself a socialist in Canada, but not here. She wouldn’t have a problem with the s-word today, though the c-word is still taboo.

To label Sawant, listen to her words: Marxist, scientific socialist, historical materialism. After declaring victory in the recall, she was asked by a journalist if she would run for Congress. (Against whom? Pramila Jayapal?) Sawant’s reply was that running for higher office was “a question for Socialist Alternative and for our larger movement” to decide, and that she did not take “an individualistic or career based or personality-based approach” to making such a decision.

When I first listened to Kshama Sawant, more than a decade ago, I was impressed. Here was a politician of ideas. I thought the ideas were terrible, but Seattle had been a one-party Democrat town for decades, and it was nice to see someone bust their monopoly. My satisfaction has long since worn off. Replacing a Democrat with a Marxist is a bad trade.

But when it comes to escapes, barely works.