When you get right down to it, the United States is rapidly becoming just another country that doesn’t represent anything more than a color on the map. Why should its citizens feel any special warmth towards its government? As the last two elections demonstrated, the U.S. may be becoming more polarized than at any time since the War for Southern Independence- and fiction is taking note of the nation’s instability. I’ve read two novels in the past few months on the same topic: regime change in the United States, and how to induce it.

The first of these books is John Ross’ “Unintended Consequences” (Accurate Press, 2005), a rather massive novel of 861 pages. It explains how an average law-abiding citizen winds up leading a movement to, more or less, overthrow the U.S. government. It traces the degeneration of American freedom from the viewpoint of a subculture that’s still pretty large, but definitely on its way out: the gun culture. The insight it offers into the gun culture is a good part of what makes the book interesting as something other than pure entertainment. When I grew up in the ’50s and ’60s the gun subculture was still quite strong.

Every kid wanted a BB gun, and many got the Red Ryder advertised in the back of comic books, as a first step to a .22, and then, if you wished, a mail-
order 20mm antitank rifle (which ran about $125). Anyone could, and many did (including yours truly) transport weapons on planes without a second thought.

Another reason the book is interesting is that it can’t be purchased in bookstores, or on Amazon. The reason is not that it doesn’t sell (the book has apparently sold 70,000 copies – a big number for almost any novel, and an absolutely astounding number for a self-published novel, actually achieving cult status), but that it’s a political hot potato, dealing with things like assassinating government agents. The idea of regime change in Washington, D.C., is a strong subtext throughout. In today’s political and judicial climate, where publishers have been successfully sued for nonfiction books that allegedly, however unintentionally, instructed people on how to commit crimes, and where the FBI has actually investigated those who borrow books on Osama bin Laden from libraries (over 200 inquiries since Sept. 11, according to The Guardian), I suppose this reluctance is understandable. But the decision of retailers is an especially slippery slope. Tom Clancy’s detailed techno-thrillers would certainly be banned, except for the fact he’s a running dog of the military and a reflexive cheerleader for almost anything 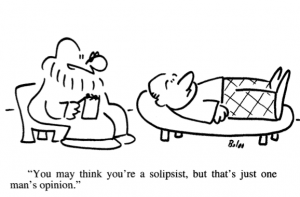 Washington does. The only difference between “Unintended Consequences” and a Clancy book is its attitude towards the political status quo.Despite the fact it’s very hard to get and advertising is only by word of mouth, it’s a big, continuing seller. The question is whether that would be the case if there weren’t a huge number of really unhappy campers out there in The Homeland. Most of them are white, male, middle-aged, middle-class Bush supporters, and therefore quiescent at the moment. But, assuming we have an election in 2008, when Hillary gets in, there’s a good chance their rallying cry will be “Sure, you can have my gun . . . when you pry it from my cold, dead fingers.”Think I’m kidding? Recall that social unrest tends to come (from different strata of society) either at economic troughs or peaks. The most recent serious trough was in the early ’80s, when there were massive tax and regulation resistance movements. It’s hard to predict exactly what will hap

Tom Clancy is a running dog of the military and a reflexive cheerleader for almost anything Washington does.

pen as the Greater Depression starts to evidence itself. But this book may be a straw in the wind.

The same could be said of the second book: “Molon Labe,” by Boston T. Party, just published last year by Javelin Press. (Malon labe is Greek for “come and take them,” the answer the 300 Spartans at Thermopylae gave to the Persian army when asked to lay down their arms.) Boston is the nom de plume of an old friend of mine, Ken Royce, who has written a half-dozen other books as well, most of which I’ve read. There are broad similarities with the why (no secrets here) and how (very interesting) parts of both books. “Molon Labe,” however, extrapolates the consequences of the nascent Free State Movement, whereby thousands of libertarian-leaning folks are migrating to the smallest counties of the thinly populated states of Wyoming and New Hampshire, with the objective of regaining some measure of control over their lives. In the novel, however, things go a bit farther . . .