Class distinctions do not really exist anymore. That notion might have been somewhat valid in 1850s Europe when Marx penned his manifesto, but toda~ by our own admission, we are all middle class. Back then and there, the descendants of peasants were kept separate from the descendants of nobilit~ who occasionally mingled with the royalty that still existed.

America has come closer to the Marxist dream of a classless society than any of the Socialist Republics that were based on Marx’s ideas. I am certain that Marx would find it strange that we were able to homogenize society without equalizing wealth. Compared to the time of Marx, there are now very few cultural barriers preventing mobility between the classes. People can travel through the classes in a single generation.

Today the classes are defined by income, which doesn’t give a good picture of social standing. How can you say that the classes still exist when a few hundred dollars is some- times the difference between somebody being in the lower or middle class, and a mere thousand can push someone on the cusp into the upper class? Class lines are completely arbitrary. Depending on which think tank or government office you are talking to, the representative incomes of each bracket vary greatly.

So why do we stick to the notion of three classes? Because it gives leftists the opportunity to rally one segment against the other; by shrinking the artificial limits that define the middle class, the Left can claim, “The middle class is shrinking!” Since most Americans identify themselves as middle-class, this is guaranteed to generate concern.

Describing America as a nation broken into three classes is 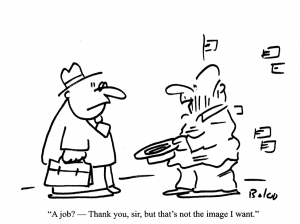 a political tactic, plain and simple. It’s time to abandon Marx’s yardstick, like the rest of the world has abandoned the man who invented it.

Tim Slagle is a stand-up comedian living in Chicago whose website is timslagle.com.
View all posts by Tim Slagle