At 9, two flows of humanity pass each other in front of Lulu Carpenter’s, the upscale coffee shop at the top of Pacific Avenue. Pacific Avenue is the main walking commercial thoroughfare in Santa Cruz, California, redesigned surprisingly well after the 1989 earthquake. It’s nothing like the collection of cheap motels leading to the boardwalk that greets the casual tourist entering Santa Cruz from Ocean Avenue.

Down Pacific comes the cortege of the houseless, walking from the shelter toward breakfast at the Salvation Army, a mile away. I don’t call them “homeless,” because owner- ship of a house does not guarantee a home, and it’s possible to make a home without a house. Also, I am sick of the sanctimoniousness of the word. Most of the houseless carry a large backpack. The smart ones carry a guitar, or a guitar case, one of the best weapons against the city’s repressive ordinances. (See below.)

It would not take much to convince me that some of the homeless have a hangover. They are mostly silent. Those who are not harangue loudly against society at large, or God, or no one in particular. One talks into a cellphone she does not have. I know for a fact that one houseless woman in her 30s can speak perfect French, with the quaint diction of what is probably a Swiss finishing school. (Trust me, I would never know how to make up something like this.)

Up Pacific Avenue from the bus depot march Mexicans on their way to work. They converse loudly in Spanish. Many laugh or guffaw. The Mexicans all wear thick sensible jackets in dark colors, black, navy blue, or gray. The houseless tend to be elaborately dressed, layer upon layer. It’s not all about the morning cold: many women, and quite a few men, wear colorful Indian, or otherwise “ethnic,” dress on top of jeans and sweaters. Every single one of the houseless is an Anglo. Perhaps race matters, after all.

Much of residential Santa Cruz is littered. I believe my own street is never swept by the city. But Pacific Avenue, the showcase artery, is cleaned every day or nearly so. There are two distinct cleanup crews. You can tell which is coming from afar. The first crew is large, youngish, noisy, and enthusiastic. It’s composed entirely of mentally handicapped people and of their minders. They make noise because they are invariably in good spirits, kidding one another endlessly and throw- ing good-humored insults around. When they are through, hardly a single cigarette butt has managed to conceal itself in a crack.

The other crew comprises mostly people in their 40s and 50s in green uniforms who work slowly, with the dignity befit- ting their status as tenured city employees. They are said to be the best paid municipal employees anywhere in America. I think this is probably fair because I suspect most of them hold a Master’s in Comparative Literature, or Fine Arts, from the University of California. They contribute to the gravitas of the community.

Lulu’s, the coffee shop, manages to maintain a steady truce between environmentally militant, abstemious, vegetarian types who hate tobacco, and smokers. I think this is because almost all the smokers are alternative lifestyle youths with pierced body parts, and existentialist graduate students from UC Santa Cruz. No one wants to find out how tough the pierced ones really are, and the graduate students earn respect by appearing to be in possession of profound truths that don’t even have a name in English. I think both the pierced and the existentialists are, paradoxically, individualists of the old school.

By and large though, the smokers are pigs: they throw cigarette filters with a half-life of 20 years on the ground although they are only ten feet from a litter box. Nobody ever com- plains about the littering because neatness is a bourgeois virtue incompatible with the community’s revolutionary spirit. I think most city elections are disputed between Maoists and Trotskyites, who have been in the closet elsewhere since 1971, and a few left-leaning liberals. All are prosperous shop- keepers. Together they promulgate and try to implement city ordinances that are probably neither constitutional nor enforceable. How can you make sleeping illegal? Scratch a leftist; find an authoritarian vice-principal. But I digress, as usual. Lulu’s owner runs a tight ship. He takes care of the butts problem in the old-fashioned, entrepreneurial way, by 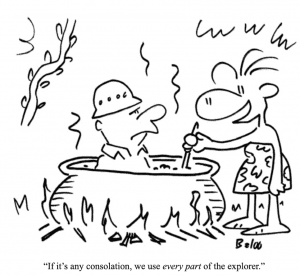 giving someone ten bucks to sweep most of the butts from his vicinity every night.

Shortly after nine, people come in for takeout coffee. The young ones are mostly workers from neighborhood shops who got up too late to fix their own coffee. (The result of a recurring epidemic: the young believe something tremendous will happen if only they stay up late enough.) A few customers sit down to read in solitude, or they chat in groups of two or three to kick off the day with conviviality. No one knows what they do for a living. The young are probably students;

They try to implement ordinances that are neither constitutional nor enforceable. How can you make sleeping illegal?

the middle-aged may be teachers (like me), or independently wealthy. (Santa Cruz’s own dangerous secrets: who is a trust fund baby? Who made a real estate fortune in the ’70s?) One can’t easily tell the well-off from the poor because shabby clothing is de rigueur.

There are some old codgers who have probably been awake for hours. I avoid them, because I suspect they want to induct me into their mutual misery society: let me tell you about my colonoscopy; I will listen about your arthritis. Among those who sit alone, reading a newspaper is common. They read the local giveaway sheet (surprisingly good, though uneven) or the Santa Cruz Sentinel (bad spelling, good local cover- age, bad international coverage), the San Jose Mercury News (there are a few techies left after the dotcom debacle), the San Francisco Chronicle (for bottom feeders like me), or The New York Times, of course. A lot of New York Times are left on the tables in a gesture of collectivist pretend-individualism common in coffee shops all over America. No one has the cojones to read The Wall Street Journal in public. There would be a hell’s worth of shunning to pay if you got caught.

The serving staff is young, friendly, and sunny. Most of them nurture a creative sideline: painting, writing, music, the pursuit of esoteric beliefs. They are all avid readers, making Lulu’s a much better literary cafe than Saint Germain-des-Prés ever knew. One young guy reads big postmodernist books of French origin. I am dying to warn him that bad French never translates into good English. I resist the temptation because youth must be allowed to make its own mistakes. I think the young people on the staff worry sometimes about what being the victims of customers’ jovial moods and gracious appreciation is going to do to their long-term creativity, which as everyone knows requires a dose of misery.

There is a punk rocker who works in the kitchen. His temples are shaved and a silver stud pierces his upper chin. He is a real conservative who works two jobs so his wife can stay home and take care of their child. This guy will never be on welfare. He is against drugs, except tobacco. I swap him stories for cigarettes. What a deal!

For months, I have been trying to devise a sociologically valid taxonomy of beverage choices. It’s tough going. The green tea drinkers are probably followers of Buddhist mysticism, and hypochondriacs to boot. The chai drinkers would like to travel; they are sure they love India because they have never been there. Once, I forced my brother-in-law, a tea trader visiting from Calcutta to taste Lulu’s chai. He told me that what we call “chai” in America, “tea” in most Indian languages, is a good beverage for those allergic to tea.

You can tell the hardline leftists by the fact that they load every beverage with prodigious amounts of sugar, or often, of honey. (Self-indulgence has a way of asserting itself.) I can’t figure out those men who order espresso or complicated Italianate coffee drinks. Raspberry latte? Menthe mocha? The retail employees on high heels, with perilously brief skirts, make chi-chi selections, of course. But so do the short-haired women in thick boots and longshoreman clothing.

Hot honey and milk is probably for those who coddle their inner child. I can’t begin to tell you how many are hairy, 200 pound, rugged-looking guys. The presence of soy milk on the menu is not surprising though: it’s the politically correct accompaniment to organically grown Fair Trade coffee.

The drinkers of regular coffee are probably solid citizens who ended up in Santa Cruz by happenstance. I suspect they have regular jobs and pay regular taxes; the brew helps them stay regular. A few might be closet conservatives. You never know!

I have been marveling at a classificatory mystery: Lulu’s offers, simultaneously, caffè latte, café con leche, and café au lait. I believe the three sets of words mean exactly the same thing. I could try each concoction in turn of course, in the spirit of scientific experimentation. I refrain because I am charmed by the reliable spectacle of three perfectly parallel universes neatly delineated by three mutually intelligible languages.

Jacques Delacroix is a sociologist, a short-story writer, and a blogger (Facts Matter and Notes On Liberty) in Santa Cruz, California.
View all posts by Jacques Delacroix