I have been practicing immigration law for five years. It is very taxing, but I carry on.

Clients speak little or no English, and insist on speaking Spanish and Haitian Creole quickl~ despite my pleas: “hable despaciamente y sencillamente” or “pale dousman et senp.” The clients and their families have little respect for attorneys. Their papers are often missing or in disrepair. Their personal hygiene is sometimes not up to my exacting standards. They move without telling me, and their telephones are cut off with alarming frequency.

The officials I deal with va~ but are often hostile or indifferent, because my immigrant clients do not vote (except in two states with unusual statutes), nor do their families vote. The judges of the Immigration Court (an administrative court within the Department of Justice which decides removal [de- portation] cases) are better than the Department of Homeland Security officials. They generally apply the law fairly.

I did have to stop handling cases involving immigrants in prison. The rewards could be great. Some people I helped free were grateful. Others were not. But the families called frequently and wondered why their relative remained in jail when another immigrant in the same position had been freed. There was almost always some crucial difference in facts. The visits to Krome and other jails were too stressful for me.

But why continue in immigration law at all when I could make a handsome living chasing ambulances? I chose immi- gration for three reasons, and I stay for the same three reasons:

1. Freedom: Migration is a subset of freedom generally. I thought that I could help make the world a freer place by helping people enter and remain in the United States. My clients voted with their feet to come from Haiti, El Salvador, China, Kosovo, and other places where there is even less liberty than in the United States. So on average, the world is a freer place 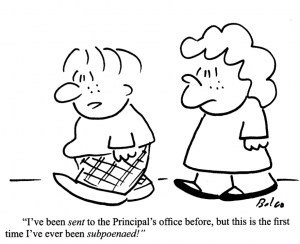 because of their movement to the United States. I help them stay here, making the world a freer place.

2. Economics: A productive labor force aids economic growth. Diversity creates innovation. Many of my clients are hard-working people. They do the gardening, farming, and restaurant work that many Americans will not. And I see many joining the middle class and starting new businesses. I help them stay here, making the United States a more prosperous place.

3. Family: Many of my relatives in Romania and Hungary were killed during World War II.
I have wondered how many might have survived if the United States, Great Britain, and other potential
havens had policies welcoming immigrants. Now I do a lot of asylum cases from Haiti and China. I have had two from Kosovo and one from Burma. I help them stay here, honoring the memory of my family.

So here I am, slogging through the trenches of immigration law. I spend much of my time preparing papers, driving, appearing in Immigration Court or before the Department of Homeland Securit)r, and interviewing and preparing clients. It takes a strong motive, stronger than money, to continue. With my three raisons de travail I will keep at it.